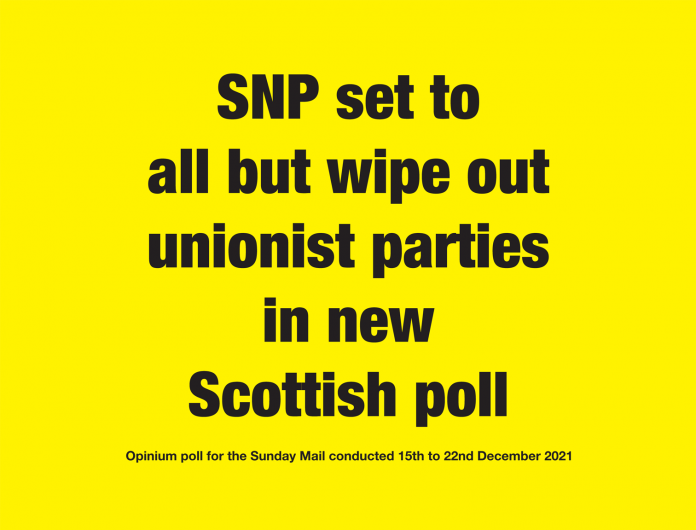 The Opinium Scottish poll for the Sunday Mail suggests wipe out for Scottish Tories losing all 6 seats they currently hold and Lablour taking 5% lead over the Tories. Perhaps the most significant finding is 79% of 2014 Yes voters believe Nicola Sturgeon will lead Scotland to independence and 32% of No voters agree.

On Westminster voting intention the poll suggests Labour’s Ian Murray will retain his seat and the Lib Dems would be down to just 2 seats, indicating the North Shropshire result has not produced a bonus for Cole Hamilton’s Lib Dems in Scotland. The poll numbers indicate the SNP would win 56 seats on present boundaries, an increase of 11 on current representation – regaining Margaret Ferrier’s seat (SNP to IND), the 2 Salmond party seats, 50 % of Lib Dems seats (2) and all 6 Tory seats.

Bear in mind this is a snapshot, effectively frozen in time, because nobody is expecting a Westminster general election anytime soon.

Opinium surveyed 1328 in this latest Scottish poll between 15th and 22nd December for the Sunday Mail. We think there is more to come and expect and that will include a question on where those surveyed currently stand on the independence question.

The Sunday Mail has a quote from Jackie Baillie who responed to the results saying. “we need serious leadership, not the divisive politics of the past. “If we are to look for devisive politics then they are to be found in the clear and marked difference in political temperature north and south of the border. No one is more divisive than Boris Johnson, current facing considerable opposition within his own party and news today that a £500,000 Tory donor, disgusted by Johnson’s sleaze, is withholding future funding.

John Curtice commenting on a question where 43% thought the SNP had been in government too long said, “that is not a question voters in Scotand ask themselves. What they ask is whether they want independence or not.” So 57% do not think the SNP have been been in power too long? Is that indicative, to some extent, on the independence question we expect to be forthcoming shortly?

We had not expected to write something today but needs must when a new Scottish poll emerges with extraordinary support for the SNP after more than 14 years in power and Nicola Sturgeon now the longest serving First Minister. This is very rare in European politics with new governments in Norway and German dependent on broad coalitions.

Clearly there is more to come from this poll and little straws gleaned might suggest support for independence is at least holding and perhaps making progress, but we must not get ahead of whatever this poll is yet to reveal.