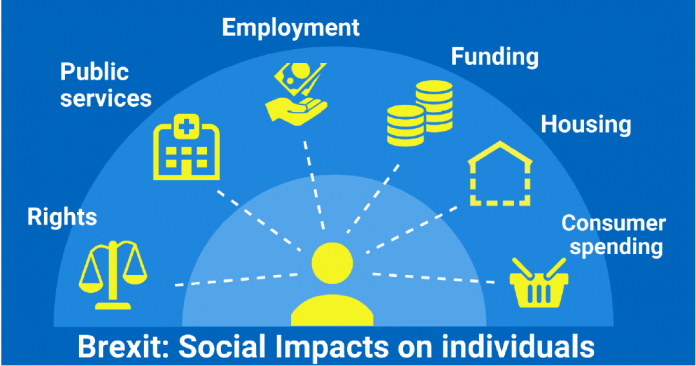 Brexiters insist everything is rosy and will become even better after Friday 31st January, their independence day, when the UK leaves the EU. But the reality is otherwise.

The pound, according to the Guardian’s monthly August 2019 analysis of key economic indicators affected by the Brexit process, had fallen 18% below its level before the 2016 EU referendum, UK inflation has risen, the manufacturing and construction sectors remain in contraction, unemployment has increased and house prices have fallen for the first time since 2009.

An October 2019 Fraser of Allander Institute report estimated that the “impact of Brexit uncertainty has cost the Scottish economy around £3 billion” relative to what it would have been otherwise. The Resolution Foundation published a report suggesting there had been a drop in household living standards since the EU referendum.

So the effects of leaving the EU are already making themselves felt. And at a personal level mental health charities have reported a link between Brexit and increased stress and anxiety amongst the UK population. For almost one in five people Brexit has caused ‘high levels of stress’ with over one in ten people saying Brexit has caused them problems with sleeping in the last year.

A report on Social and equality impacts of Brexit has been published by the Scottish Government. This has identified 137 (one hundred and thirty seven) potential impacts on those already facing inequality, discrimination, or social exclusion. These impacts include the loss of legal rights, employment protections, funding opportunities, healthcare rights, and supply and access to food, fuel and medicines.

These impacts are largely socio-economic in nature as equalities groups tend to comprise people who are the most marginalised, or have the least political and economic power in society – disabled people, minority ethnic communities, refugees and asylum seekers, and women who all tend to be at a higher risk of poverty and insecure employment or unemployment than average, making them more reliant on public services and anti-discrimination law.

Given that 890,000 households (37%) in Scotland are considered ‘financially vulnerable’, any negative impact on household finances resulting from smaller UK economic growth could put further pressures on them.

The EU has advanced social policies that affect the lives of every UK citizen. with its social protections include rights to:
• • equality and protection against discrimination on the basis of sex, race, religion, age, disability and sexual orientation
• • equal opportunities and access to the labour market (including equal treatment for men and women at work, pregnancy, maternity and parental leave)
• • fair working conditions and health and safety standards in the workplace
• • social protection and inclusion funding and provisions
• • consumer protection
• • free movement and equal treatment in social security systems
• • reciprocal access to healthcare and transferable pension rights
• • reciprocal access to higher education through Erasmus and Socrates schemes

With a right wing Conservative majority in the House of Commons, a hard Brexit (Johnson’s preferred outcome), along the lines implemented by his government through the EU Withdrawal Agreement Act or a no-trade deal Brexit, where the UK leaves the EU at the end of the transition period without agreeing a future relationship with the EU, will come to fruition. Many of these social rights and protections which UK citizens currently enjoy are potentially at risk when the UK leaves the EU.

The European Charter of Fundamental Rights, one of the most significant pieces of EU legislation, brings together all the personal, civic, political, economic and social rights enjoyed by people within the EU.

For example, the Charter of Fundamental Rights includes freestanding rights to non-discrimination, the right to human dignity, and the protection of a child’s best interests (which do not have direct equivalents in UK human rights law).

The UK will also be entitled to amend the Equality Act (2010) without regard to EU law after Brexit.”

The Scottish Government has concerns that this power could be used to facilitate a lowering of standards and protections, for example in relation to workers’ rights. In addition, the UK Government will not retain the Francovich principle of state liability.

The race to save lives in Scotland