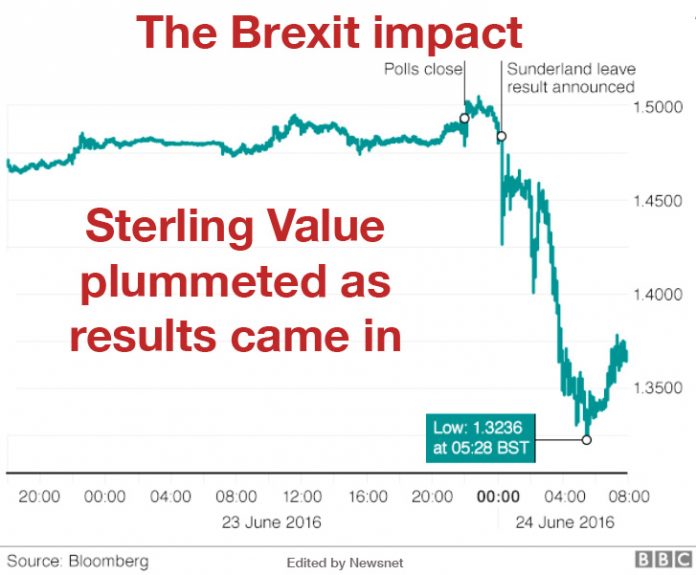 An extraordinarily detailed report from Bloomberg earlier this week shed more light on the manipulation of the sterling exchange rate in the hours before and after the EU referendum results started to trickle through in the early hours of 24th June 2016.

A central figure in the manipulation was one Nigel Farage. He denies personally profiting adding ruefully that he wished he had. Whether he did or not is beside the point. Farage worked as a commodities trader from the time he left school in 1982 and continued with various trading companies well into the early years of the 21st century including a later period as a currency trader, overlapping with his part-time role as an MEP. Farage knows how markets work and how information moves market prices up or down.

What is clear from public record is Farage conceded Leave had lost the referendum when his concession speech was broadcast by Sky just after 10.00pm when the polls had closed. Politicians never concede until the trend is clearly established. So why did Farage indicate Remain had won before results began to come through several hours later and were actually indicative of a likely Leave win? A question we will answer as we sift through the new information from Bloomberg.

No public exit polls were conducted so the broadcasters – Sky, ITV and the BBC who jointly finance these for general elections did not have exit poll data to share with viewers. Enter Farage to fill the vacuum in an interview recorded at 9.40p.m. – before the polls had closed, assuring him of immediate coverage come 10.00p.m.

Farage according to the Bloomberg investigation continued to indicate he thought Remain had won. “he twice told the world on election night that Leave had likely lost, when he had information suggesting his side had actually won. He also changed his story about who told him what regarding that very valuable information.”

Professor John Curtice, the media’s ‘go to polls man’ for analysis and interpretation explained that his predictive model relied on past comparable votes and for Brexit there was none. So, as for the Scottish independence referendum, there was no Brexit exit poll for the broadcasters as a basis for early discussion until results began to come through and some sort of pattern might be discerned. Enter Nigel Farage into a favourite place in the media spotlight when there was no contradictory evidence in the public domain.

Every known polling company had been working for weeks on methodologies then throughout polling day collected data as people left the polling stations, rather undermining Curtice’s claim that a publically available exit poll could not be provided as soon as polls closed.

It is illegal under electoral law to publish exit-polling information while people are still voting. Yet all the major polling companies were working round the clock crunching the data every hour of polling day and passing it on to their currency trader and hedge fund clients and ‘Curtice was involved’ according to Bloomberg.

The law on exit polling lacks clarity on a full interpretation of what ‘’publish” means and has never been tested. It seems parts of the private sector can have access to this information but the wider public cannot. Polling companies interpreted the law differently. Some thought they could take on multiple clients. YouGov decided, after legal advice, they should only take on exit polling work for a single client as that was less likely to be interpreted as ‘a section of the public’ as set out in the legislation.

For YouGov it was a big money earner because the value of their work to the client could be worth hundreds of millions. They multiplied their normal fee by 10 and charged their client £1 million. The exit polling data was reported on an hourly timescale with three YouGov personnel working in the client’s data crunching centre according to Bloomberg.

Curtice told Bloomberg, “polling company ICM paid him for his work on behalf of a hedge fund called Rokos Capital Management.” Curtice said he was not involved in the polling or any analysis. His client was ICM and he helped them build the model that enabled Rokos to predict the likely outcome of the vote. Rokos Capital Management is reported by Bloomberg to have made $100milion on their sterling trades.

Bloomberg also reported “according to two sources” that Steve Fisher associate professor at Oxford University and a member of Curtice’s media polling team “helped Survation design the syndicated exit poll it conducted for multiple hedge funds.” Survation is Farage’s favourite polling company and it has been alleged, in two published accounts, Survation was the source of Farage’s polling information that Leave was ahead. This was known to Farage ‘at some point’ on the evening of 23rd June.

As long as these two academics did not know the predictions of the work they had helped design they could turn up in TV studios to contribute to analysis as results came in whilst knowing predictive work had been undertaken which could have a significant impact on the value of sterling.

Harold Wilson was the last UK Prime Minister who tried to take on the currency speculators – even introducing capital controls. Those days are gone as are UK imports and exports being in balance as they were in Wilson’s time.

Why are foreign exchange markets (Forex) so profitable?

Like any trading market there are also losses. The interest from currency traders and hedge funds was inevitable given the potential for sterling movement either way depending on the result. The bigger the surprise of a Leave win the bigger the profits. Forex trading is huge and dwarfs the global stock and bond markets. Global stock markets are worth around $70 trillion. Bond markets over $100 trillion. Forex markets never sleep, never take a day off and are worth over $5 trillion a day.

Since 1971 most currencies float, no longer tied to the gold standard. This means currencies are more volatile and traders love to seek out any unexpected currency shocks.

The Guardian reported, also quoting Bloomberg, “books, by the leave campaign financier Arron Banks and the political journalist Tim Shipman, both said Farage learned the results of ‘an unidentified, financial services exit poll’ before polls closed at 10pm.” Farage told Bloomberg that the only external exit poll he received on the day of the referendum was conducted by Survation. Survation’s poll correctly predicted that leave would win the referendum. He repeatedly told Bloomberg that he learned the results of the exit poll “minutes after” Sky broadcast his comments. Yet he was still suggesting he thought Remain had probably won for another hour in an interview with the Press Association.

This can be explained by an older story. Whilst London was waiting for the outcome of the battle of Waterloo investors’ eyes were on Rothschild with his known extensive European connections and use of the internet of the day – pigeons. Rothschild sold and sold driving down the value of stocks. “Its gone tits up at Waterloo,” other investors concluded and sold heavily. Rothschild knew the real outcome and sooked up the stocks fellow investors had just sold at bargain prices. Much like what happened in the hours following Farage’s ‘surprise early concession’.

The Times asked Farage in October 2016 if his early concession, maintained for over an hour had been an attempt to drive the value of sterling “either for the benefit of hedge funds or himself.” – Farage replied: “No, no, no, no. I wasn’t shorting it – I should have done!”

Bloomberg has put on record the sums they believe some hedge funds made following extensive interviews, some with those connected to polling companies at the time. A lot of references in the lengthy report are ‘on condition of anonymity’ or not answered due to ‘non disclosure’ agreements’.

The Guardian reported on Monday evening “Sources told Bloomberg that they believed Brexit to have generated ‘one of the most profitable single days in the history of their industry.” Odey Asset Management is run by Conservative party donor and Leave supporter Crispin Odey, and is reported to have made $300m from Brexit.”

Bloomberg reported Brevan Howard, which at a minimum bought exit-polling from ComRes, made $160million on 24th June. Adding these up with $100 million gain for Rokos the total is over half a billion dollars. We will never know the full extent of all the trades on 24th June 2016 but Newsnet would be very surprised if $1 billion was not a rather modest estimate

When large sums of money manage to fall into the hands of the super wealthy political donations, unconnected of course, might well be not far behind.

Sterling dropped to $1.32 on 24th June 2016 recovering slightly in later trading in London. The UK government has been making such a splendid effort on Brexit that gains over recent months have been wiped out. As I write sterling is worth $1.30.

There was a traditional view that devaluation was good for export sales. As the UK is a net importer of goods the result is negative for 99% plus of the population who find their shopping spend is ever curtailed. No surprise then that stores and supermarkets are closing across the country. There is only so much household budgets can stand before living standards drop when incomes do not keep pace with the real rate of devaluation and Brexit inflation.

Still the hedge funds got their Brexit dividend so we should all shut up and take a stroll down to the local foodbank.