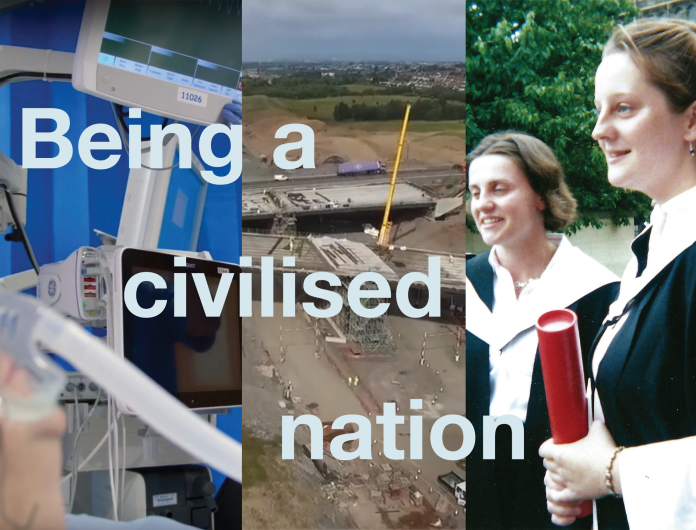 Peter Brown argues that tax, invested well, is part of what being a civilised nation is and offers two ideas on radically simplifying taxation as a part of what we hope will be an ongoing contribution to how taxation policy is likely to be very different in an independent Scotland.

It’s not tax. It is a contribution towards civilisation.

If we really want to pay no tax we should go to a country where there is no infrastructure, no road system, no police service, no education or health service and no sewerage.

Anybody for Nigeria? Somalia? Or the backwoods of Botswana? OK so now we have established you quite like living here, we have to find a way to make the system work.

Whilst it is tempting to start with a completely clean sheet of paper moving to an independent Scotland, The best way to make successful change is incrementally. There are various things we could do quite easily, which would probably not make an immediate difference, but would sow the seeds for a more stable, equal and prosperous country in the future. Even under devolution, it has been possible to reform stamp duty into a progressive tax, falling harder upon the rich than the poor.

“it is not very unreasonable that the rich should contribute to the public expense, not only in proportion to their revenue, but something more than in proportion.”

300 years ago Adam Smith was advocating progressive taxation. Or a progressive contribution to civilisation.

However there are two main areas in which I believe considerable benefit could be derived with relatively little administrative difficulty. The first is in tax relief for new-start businesses and the second is the way in which VAT is levied. Currently if a UK taxpayer invests in a qualifying new business, they can claim the tax relief from the Inland Revenue. So if, for example, a UK taxpayer invests £10,000 in a qualifying business the inland revenue will provide tax relief on the investment. And when the taxpayer comes to sell those shares, any gain is not taxable. The only condition is that the investment is held for a minimum of three years.

Anybody who has set up a business will know that three years is nothing; most tax relief schemes have a much longer minimum investment period. It is my contention that the minimum period should be 10 years, and that this very generous tax relief should only be available for businesses in less favoured areas, not thriving city centres. (This is already the case for similar relief in the USA)

This change might result in a slight reduction in EIS investment, but this would be more than compensated for by greater stability in new start businesses. Investors selling after three years often find the most willing buyer is a competitor, so the new business immediately loses its independence. By obliging investment for a minimum of 10 years the new business is in a much better position to stave off unwanted takeovers or mergers. The basic principle of the legislation remains unchanged; all that would need to be changed is a couple of numbers, and the effect would be almost immediate. Easy to do, and good for new businesses.

The second field which would merit examination is VAT. All businesses charge VAT on their invoices, but businesses may also subtract the VAT that they have paid from the VAT that they are due. The effect of this is that the only party actually paying full VAT is the end consumer – you and me. As a tax on sales, it is inherently regressive; poor people pay exactly the same VAT as rich people but it represents a much higher proportion of their income. That’s not what Adam Smith was advocating.

By simply changing the mechanism whereby VAT returns are submitted, a considerable reduction in the rate of VAT could be achieved. If companies were not permitted to subtract VAT they had paid from the VAT return, all businesses would pay VAT as well as all members of the general public. As the effective charge points for VAT would multiply considerably, the actual rate charged could be reduced very considerably; perhaps to 3%.

The effect on the businesses concerned would be negligible; 3% is not a lot of money. However the effect on the general public would be an immediate reduction in the price of goods of up to 17%. Undoubtedly some businesses would raise their prices slightly, but the overall effect would nevertheless be to reduce the regressiveness of VAT and increase its effectiveness. Businesses currently spend a lot of time and money looking at ways to reclaim VAT. If it is not possible then there’s no point in looking, thus saving time and effort. Like the previous measure, implementation would be simplicity itself. The VAT return is already being completed; the only difference would be that the full amount would be payable, with no discounts for VAT paid out.