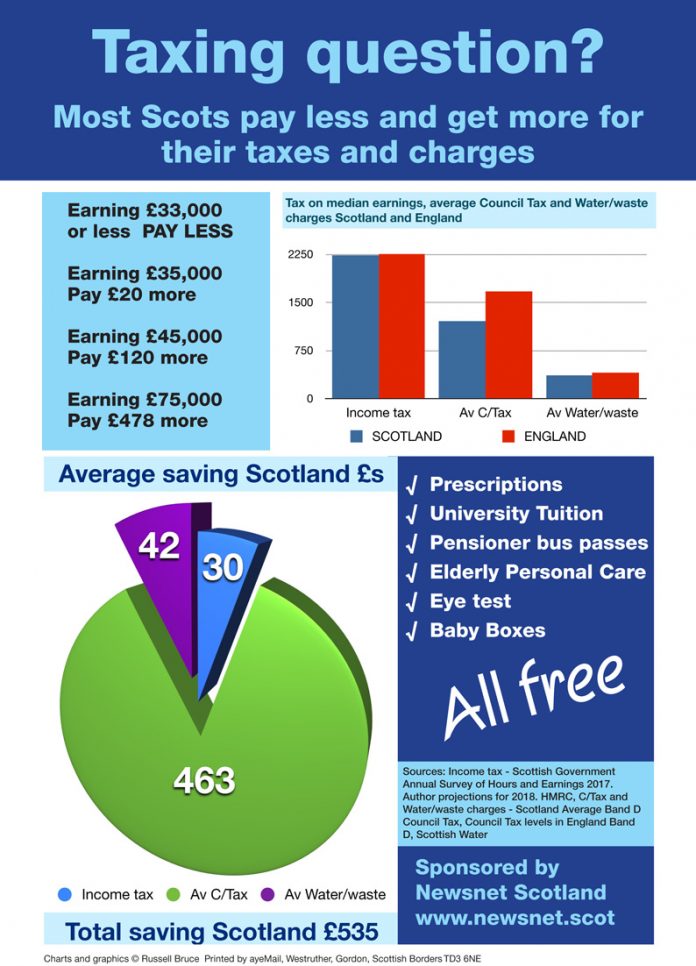 Taxes and charges are lower in Scotland

Newsnet has being doing some analysis. The Tories have been a bit quiet on their mantra of ‘highest tax in the UK’ of late. Suspect it was not playing as well as they expected but it will make a return clarion call at some point so we need to get the full reality in public view.  Like just about everything the Tories come out with there is never a grain of sand separating truth from distortion.

We decided to look beyond income tax rates, that in Scotland favour those on lower incomes and ask those earning well above median income, a little more. 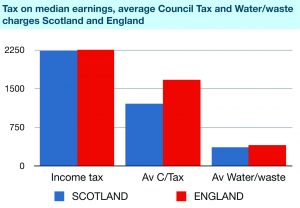 Whether rich or poor, Scotland provides a host of universal advantages. That is the mark of a socially just society. From prescriptions to personal care; bus passes to baby boxes; eye tests to university tuition fees – everybody is treated the same.

Newsnet wanted to look at other areas such as council tax and water charges and an even more interesting picture emerged. The next diagram shows the average council tax for a band D property in the English regions plus Wales and Scotland. Guess who came out lowest! 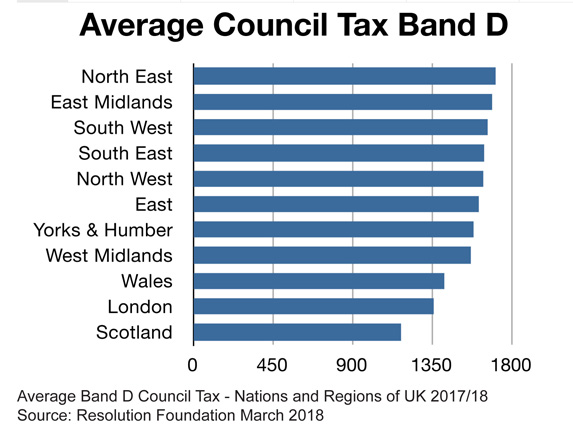 The North East of England is the poorest region of England (Band D average £1710) yet pays more in council tax than London (Band D average £1360). The Resolution Foundation in their recent report found London was advantaged to an extraordinary degree. This is, in all probability, more to do will central government expenditure in London than careful management by London’s councils or an effect of population density. These figures are an average for Band D properties and there are variations in all areas, including Scotland.

The next area we looked at was water and sewerage charges that we pay with our council tax. Scottish Water belongs to the Scottish Government. In England and Wales the water boards were privatised. The Tory Government is obsessed with selling anything it owns to the private sector. Latest example, shares in RBS – at a loss! Yet there remains a lingering 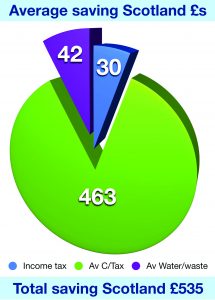 belief, according to polling analysis, that the Tories have some kind of economic competence.

Scotland has a lot of water and it is well managed. Water and sewerage charges in Scotland are £42 lower on a band D property than the average in England with its multiple privatised water companies.

Adding this all together, for someone on median income in Scotland paying council tax and water charges on a band D property, the average saving in Scotland comes to £535 a year. 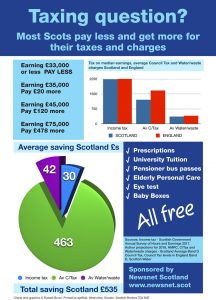 Newsnet is working with ayeMail and the Newsroom team to produce and distribute campaigning materials in preparation for Indyref2.

We have produced a handy A4 poster which was distributed at The Gathering and the March in Dumfries. Also available in a pack of 20 at £3 here

The poster pack is also currently being distributed as part of a pack on tax to Yes groups.

While you are here

Who are the real racist intolerant bullies?