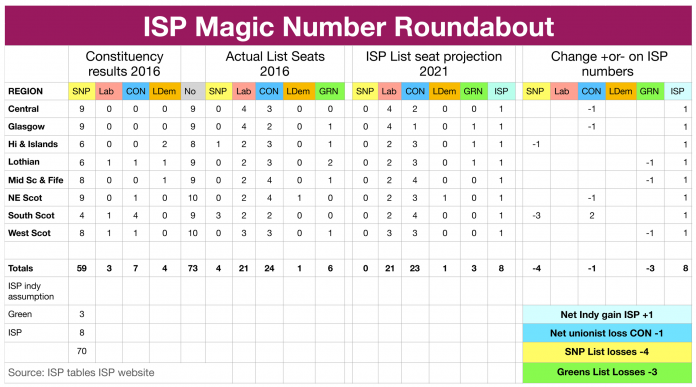 Those pushing the idea that the ISP can make a breakthrough on the list vote do so despite no indication the ISP can achieve a vote share that would give them any MSPs in May, just 11 weeks away.

An ISP supporter kindly pointed me to the ISPs detailed calculations by which they estimated they would gain the last list seat in each of Scotland’s 8 regions. Unfortunately this takes no account of any past voting record or actual polling evidence so is entirely in the realms of the theoretical.

The ISP make several claims about their participation in this May’s election. That the number of Unionist MSPs will be reduced. Their calculations with considerable assumptions do not bear this out and show no reduction in Labour or Lib Dem MSPs with just the reduction of one Conservative MSP, but don’t cheer that yet.

They also claim an increase in pro independence MSPs which would be the case on their dream scenario, showing them knocking out half of the Greens existing MSPs when the Greens on polling trends are predicted to increase their MSPs. The net independence parties’ gain with 8 projected ISP seats comes out at an overall gain of just 1. So the ISP rhetoric looks very far from the mark.

To be fair the ISP calculations are meticulously worked out but simply do not translate to known political history. There are examples in other countries of a new party making a breakthrough but those have been against the background of national political dysfunction and have been led by high profile leaders and pots of cash. Neither apply to Scotland at this time with strong support for the SNP with a highly regarded leader with a UK wide and international profile. The ISP also needs to breakthrough indicative trends of rising support for the Greens.

How likely is it the ISP can displace the Greens?

There are two key areas that are used to inform probable trends. Past results and current polling data. So let’s look at the list performance in 2016 of minor parties’ total vote and percentage vote share across the eight Scottish regions.

In 2016, of the smaller parties’, only the Greens and Lib Dems succeeded in passing the 5% vote share threshold. It was a narrow squeak for Willie Rennie’s Lib Dems picking up just one seat and losing 2 compared with 2011.

Both Patrick Harvie and Willie Rennie have fairly high profiles, are already MSPs and can expect a fair amount of media coverage during the election. The ISP does not have anyone to match them in profile but hold the front page just in case.

Totalling up ISP hoped for votes in the 8 regions comes to 128,686 votes which is 21,710 short of the Greens vote in 2016, the party they hope to overtake to give them those last list seats in every region. Given a lack of history and current profile achieving 128,868 votes looks forlorn.

The Greens were only marginally short of the required 5% in Central, NE Scotland, and South of Scotland regions in 2016. If their poll ratings hold they can reasonably expect to pick up seats in these three regions in May.

Turnout at Holyrood elections has been much lower than for UK general elections in Scotland. Turnout in 2016 at 55.6% was higher than 2011 and the highest since the first election in 1999 when the turnout was 58.16%. Given that independence and Scotland seeking to become an EU member state will be headline motivation it is highly likely that turnout could break the 60% barrier for the first time. That would mean all calculations based on past turnout levels would be upended and the 5% entry point to reach actual list seat calculations would involve a lot more real votes.

What advantages do the unionist parties have?

They know this is the election that will determine whether Scotland can vote on independence again and will combine with the British state to throw everything at the SNP and the independence movement, so expect much money behind the national campaigns and a targeted approach in fighting to retain constituency seats they currently hold. The Labour party have 3 constituency seats, the Conservatives 7 and the Lib Dems 4 which means they can concentrate their campaign on these seats and any key targets.

We can expect to see a degree of unofficial collusion between unionist parties to help the most likely to defeat the SNP as was the case in 2016. The SNP will have to fight hard for every constituency seat they hold as well as those that are top targets current polling suggests are in play.

What difference will postal votes make?

With probably the bulk of votes cast with a postal ballot this could well be another factor helping to increase turnout. It certainly made a difference in the recent US elections with all previous turnout records broken. The Tories are best at organising their postal votes and have extensive records to work with. None-the-less the US recent experience shows motivating younger voters and other groups more resistant to turning out is possible. The ISP is at a disadvantage with no long-term campaigning record and data collection capacity.

That the SNP have challenges in achieving an overall majority again as they did in 2011 goes without saying. The Salmond affair comes at a less than convenient time and his link with the far-right weekly, The Spectator, makes for strange bedfellows particularly when Andrew Neil, that well known supporter of independence, enters the fray to provide finance for a court challenge over material from a certain trial.

The regions the SNP still have best chance of winning list seats are the Highland and Islands and the South of Scotland. With 73 constituency seats it is technically possible to achieve a majority of 1 by winning 65 but that is a big big call. The SNP also needs the fall back position of the list in all other regions as a back up in the event polling indications fall short.

The reality the independence movement is facing is that it is this time or probably never for the SNP to win an overall majority to enable a second referendum. Waiting another five years is the last thing the wider Yes movement can countenance in the current mood. Recreating the conditions again in 2026 looks as forlorn as the ISPs magic numbers.

Out there in the Long Grass

That would be Reform UK (RUK). The rebranded Brexit party that has indicated they will contest all the Scottish regions on the list. Although in the larger scheme of things of no great importance, we know around 8% of the Scottish electorate want to see the Scottish Parliament abolished. That is where RUK could gather enough support to make it through the 5% barrier on the list. They have the finance, organisation and Brexit ruthlessness to achieve a result if they follow through as they did in the May 2019 EU election which would certainly dent the Tory vote as it did then.

On the other hand they might pull back as they did for the December 2019 general election to give Brexit Boris full rein. They will have no compunction about dropping Scottish leader Michelle Ballantyne and any other selected candidates, as they did then. In that event, too right-wing even for the Tories, Ballantyne might just run anyway standing in Ettrick, Roxburgh and Berwickshire constituency to give her a lift on the South of Scotland list. That would make ERB constituency more interesting than it promises to be. But we digress, although the wider point is there are always some constituency results that spring surprises.

Newsnet does not challenge the ISP’s right to attempt to fulfil their dream. Scotland is a democracy and our system provides the right to create as many minor parties as there is some support for. Newsnet is non-party, supporting both independence and membership of the EU. We have seen nothing in the ISP figures to convince us that the ISP will have a significant impact in the outcome of May’s elections. Supporters of the ISP tell me on Twitter that ‘the ISP has yet to enter the fray’. Time is running out against a no score in opinion polls but we will hold a front page for the big announcement already long in the waiting.

Note. The tables accompanying this article are compiled from the tables and calculations on the ISP website. We recognise the ISP had to use the 2016 results as a starting point but if as we have suggested there is a record turnout all the numbers change.