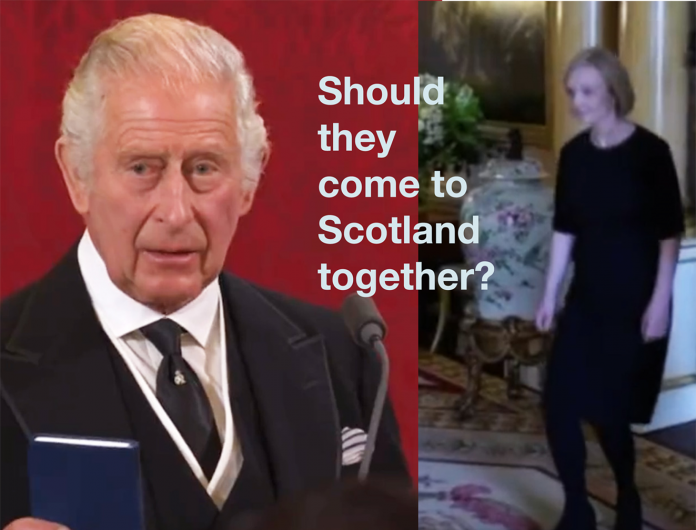 The reference to the Church of England was not surprising in Charles III address on Friday evening but the UK is a country of many faiths and increasingly none. The tone in Friday evening’s broadcast was inward looking and self centered. There was a stark difference between what the late Queen would deal with in her Christmas speeches. When she spoke about annus horribilis in relation to her family that was one thing and a recognition the monarchy did not always get everything right but she would also sympathise with the people of these islands and beyond when populations also faced difficult times.

The mood today is very different from the day 25 years ago when the Queen and Prince Philip were forced to go to London following the death of Diana. The vitriol on the posts attached to the flowers for Diana were an eye opener for the head of a dysfunctional family. It is fair to record that Charles was responsible for their appearance, understanding the public sympathy for his former wife and public demands the Queen show face. Megan Markle appears to have inherited such disapproval from the Queen’s siblings although Charles was a bit more inclusive in his reference to Harry and Megan noting them making their home in another country.

A short reference to the fact that the people of this country are today facing difficult times would not have gone amiss. It would not have needed to lay blame anywhere but just simply recognise the concerns of the population over the cost of living, inflation and the cost of energy. For now there is a warm feeling towards the new King but will that survive what for many looks like a bitterly cold winter. Relating to the public’s wider concerns at times of difficulty was something the late Queen could be good at.

Newsnet’s position is one of respect for the late Queen. We recognise her contribution and life of service to the UK and Commonwealth. The recognition from leaders all round the world is the political reality when a head of state dies and a political convention of value which political leaders of all parties in the UK have signed up to.

We must separate that from the overblown reaction from many in the UK, especially in England. It so happened that with another Newsnet contributor I was in London a few days after Diana’s death to attend a Visit Scotland promotion we were involved in. We understood the sadness but the fields carpeted with flowers seemed an over reaction we found difficult to comprehend. Such is the nature of British, especially English reaction to the monarchy. 25 years ago it was Diana, who was never well treated by the ‘family’, not the Queen who was lauded. Today the Queen is remembered with a fondness that was reserved for Diana 25 years ago.

Newsnet is pro independence and pro Europe which means we are less than enthusiastic about the workings of the British establishment and the present constitutional position. Nicola Sturgeon, despite misguided criticism, handles this very well. The last meeting she had with the Queen demonstrated they enjoyed a good working relationship and enjoyed each other’s company. That is the mark of two women who understood such relationships are not black and white and were able to work together for best advantage.

It was interesting that the FT, referring to how the Queen kept clear of politics, noted there was a departure from her usual position just before the 2014 referendum. It was a very political statement and is a warning to Charles and the monarchy to keep out of the debate on independence. To quote a well know royal phrase we in Scotland ‘were not amused’.

Many are more inclined that Scotland become a republic in the longer term. That is a possible choice for a future independent Scotland to make should it chose so. That is a debate for after independence has been achieved. Scotland has been a monarchy for over 1000 years. Should that continue beyond independence then the constitutional position of the monarchy must be one more suited to the 21st century, one without the current oversight of and vetoing of legislation. There are good examples to draw from in Northern Europe.

Nicola’s nod to Charles in London at the meeting of the Accession Council (Privy Councillors) yesterday before she signed was a typically Scottish greeting and dignified compared to Truss’ awkward curtsy. Around 1960 I was in the Netherlands and met an old flame of my mother’s who talked about the confusion they first felt about this greeting from the Scottish troops during the liberation. He explained that in Dutch terms the nod was a dismissive gesture but that they soon learned the intention of the Scots was very different. Such are the differences, even in European societies and UK inter-nation, we need to be aware of. The sum of a nation’s values can be both fluid and contradictory.

The Charles III and Truss tour.

They cannot come to Scotland and not meet our First Minister as that would be an insult to Scotland. Is this intended as a fence building exercise or as preparation to undermine Scotland? Nicola Sturgeon has made it quite clear she is open to positive engagement with the UK government, just as she was with the Queen. Truss’ aggressive rhetoric on Scotland from behind the suit of armour and English pike shows no sign she might become more pragmatic on inter-nation relations. It now appears the focus on Monday will be on another service.

Sir Tom Devine, knighted by the Queen for his services to Scottish History, is today reported as saying “

One of the things which does have a degree of political resonance is that, unlike recent Conservative governments who seem to increasingly regard Scotland as a regional appendage, the Queen understood she was dealing with a nation which came together in 1707 in legal partnership with England, and that it is one of the most ancient and respected nations in Europe going right back to medieval times.

“The refusal of the government to consider a democratic referendum – not to concede independence but just the democratic right to have a vote – is creating a great danger, the Union moving from one of consent to one of coercion. That was never, as I understand it, in the mentality of Elizabeth II.”

Our new King is of course welcome to visit Scotland tomorrow but bringing along Truss in tow presents a danger to the monarchy unless it is intended to help split the interests of the monarchy from those of conservative unionism. Does Charles have his mother’s understanding that the state and the right of Scotland to decide to become a new independent state, should we chose to do so, is not conflated with any need to continue with the political union?

Whether we the people are any clearer on that point after the visit seems unlikely but perhaps a process may have begun to give Scotland the democratic right to a referendum that was the mandate we the people gave when we elected the Scottish government in May last year.

In bringing Truss with him to Scotland Charles is walking a political tightrope whether that is what he understands or not. The interests of a monarchical union are not the same as a political union. It is critical Charles understands that and Truss does not leave Scotland believing that both are conflated. It is hard to believe Truss will not use her part in the visit to consolidate her belief in a political union by coercion.

Charles will be a very different monarch from his mother but has he inherited her wisdom? He starts his reign with approval ratings well below those of his mother and other royals.

Coming 5th means King Charles III has work to do. Princess Anne on 41% has more than twice Charles’ 18% ranking.

This poll of Scottish opinion at the time of the Jubilee when the Queen was in better health is something of a warning that prolonged Royal celebrations do not go down well with the Scottish public. The totality of the mourning period lasts until 26th September. It is not just in Scotland that the public are seeking a return to normality, there are calls across the UK for a return to normality in news coverage, not least due to deep concerns over inflation, food prices high energy costs and a Truss government that will not recognise the damage of Brexit to the UK’s world standing and economic opportunity.

Truss’ role in the tour has been downgraded. Jessica Elgot, Chief Political Editor of the Guardian has tweeted “No10 clarifying today that the PM is not going on a tour of the nations with the King (that description had raised some eyebrows). Her role will be attending the services of reflection in Wales, Scotland and NI.

With the Queen’s passing it is time to forgive her 2014 intervention. The abiding memory of the time of the 2014 result is the Queen kicking Cameron’s arse over the ‘purring’ comment.