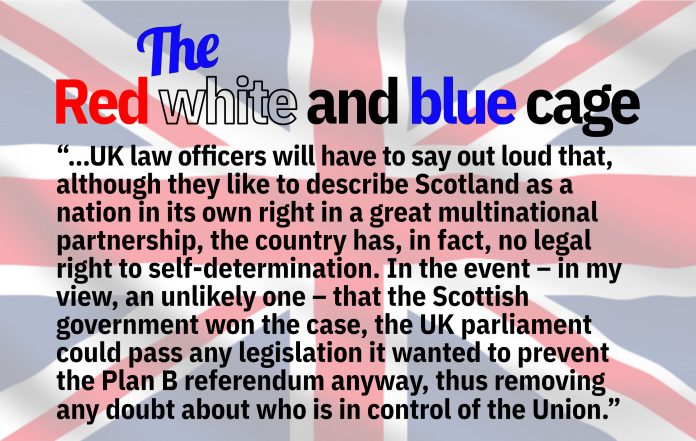 Much publicity and lavish praise has been heaped upon the recent paper and lecture given by Ciaran Martin, Professor of Practice in the Management of Public Organisations, Blavatnik School of Government, University of Oxford. Professor Sir Tom Devine called the paper “Powerful and penetrating.” His paper: Resist, reform or re-run: short- and long-term reflections on Scotland and independence referendums, and the video of his lecture can be accessed here.

Between 2014 and 2020 Professor Martin led the government’s work on cyber security, founding and leading the National Cyber Security Centre, a subdivision of the intelligence agency GCHQ.

Added glitter is given to Professor Martin’s deliberations by his history, having been a senior UK civil servant who worked as Constitution Director in the Cabinet Office between July 2011 and January 2014. Cabinet Secretary, Sir Gus O’Donnell, had appointed him following the election of a pro-referendum majority in the Scottish parliament.

Coming from such a background it is inevitable that Professor Martin’s comments, although regarded as impartial, are nonetheless coloured by his civil service work to preserve the union. So his deliberations from a British establishment viewpoint perhaps display a lack of understanding of the frustration felt by many Scots that they appear trapped within a red, white and blue cage from which there is no escape.

Indeed he almost appears to blame Scots for the position they find themselves in. In the good old days of Tory and Labour you could almost guarantee that a few Scots would find themselves in Cabinet, some even with one of the major offices of state. But since the rise of the SNP and the return of a large number of SNP MPs to Westminster, that era has come to an end, with the most significant Scots, in Professor Martin’s view, now being Michael Gove and Annalise Dodds who both represent English constituencies. So because we have declined to play the Westminster game we are our own worst enemies, destroying our chances of being represented by a modern-day Gordon Brown or Sir Alex Douglas-Home. Nicky Fairbairn is also cited, though few must now remember him.

There is much talk in the paper of the lack of honesty by both sides in 2014 with unionists insistent that an independent Scotland would be bankrupt, impoverished and shunned, whilst those favouring independence painted a rosy picture of everything remaining the same or becoming much better.

“The core implausibility for both Scottish nationalists in 2014 and Brexiteers in 2016 was that change would be minimal and involve no hard choices: it was striking that campaigners for such radical change sought to emphasise that all the benefits of the arrangements they sought to leave would be maintained after withdrawal from observing the obligations that gave rise to those benefits.”

Did nationalists promise the earth? I remember numerous acknowledgments that there would be challenges, problems to be overcome, but that these would be ours to solve in the way most applicable to Scotland rather than London and the south of England, but not surprisingly perhaps a gloss was laid over the size of the task that creating a new state would bring in case it deterred supporters.

Scottish government, says professor Martin, sought to portray their case: “on the positive side this consisted of a mixture of properly authoritative statements and legitimate aspirations they hoped to pursue. On the negative side, they offered a mix of unprovable and implausible assertions.”

My memory is that the No side was pushing that even harder with wild, unsubstantiated threats and assertions. Federalism? Bombing airports? Alien invasions? They even made promises never meant to be kept. The Vow?

Given that on the economic side much of the information and many of the figures required are not available, perhaps it could be expected that not every area could be accurately costed. Many economists did publish their findings, but as usual the UK government made much of ridiculing these. There was certainly much more information, and reliable information, available in 2014 than in 2016 during the Brexit campaign.

Scotland’s case for independence has always struggled against the lack of information provided by a government determined to portray the country as too wee, too poor and too stupid. Our natural resources have largely gone unacknowledged, our education system and NHS rubbished, our government derided or ignored.

Commenting on such a significant paper loomed as a daunting task. Luckily others rode to the rescue. These say everything needed to say, and in a precise and informed manner. All of these articles were in the National.

The first to catch my eye was an article by Gerry Hassan: How the Union’s being undermined by Tories who don’t understand it. Hassan writes about the UK Government flexing its muscles by taking the Scottish Government to the Supreme Court “over the legality of two pieces of legislation passed unanimously by Holyrood: one on the incorporation of the UN Convention on the Rights of the Child, the other the European Charter of local self-government.”

He then goes on to cover professor Martin’s report, saying:

According to Martin: “The formal position of the UK Government appears to be that there will be no lawful, democratic path to achieving Scottish independence for an unspecified number of decades.” For Alister Jack, Secretary of State for Scotland, this could be 2039, and for Johnson 2055 – the latter the 41-year gap between the 1975 and 2016 European votes.

First that “The Union can be maintained by force of law – but is it wise to seek to do so?”

Second that “There is no viable alternative model for the UK, which means that the choice facing Scotland is between the status quo (or some variant of it) and independence.”

Thirdly that “The 2014 referendum template is broadly replicable for a further referendum”.

And finally that a “repeat of the 2014 campaign, in which both sides unnecessarily complicated what is a huge but actually reasonably straightforward political choice, should be avoided.

The next article that drew my attention was by John Drummond: As the UK breaks down even further, prepare for ‘hyper-Unionism’ Drummond initially refers to the recent report by senior Cambridge academics, Professor Michael Kenny and former senior civil servant, Philip Rycroft, which urges a move away from “hyperunionism” to a more co-operative approach by Westminster.

Their report entitled Union at the Crossroads, Can The British State Handle the Challenges of Devolution, exposes the ‘assertive Unionism’ that characterises the Tory party. They say the centrality of this strand of thinking within British government circles has ‘injected a significant new destabilising dynamic into the current situation’”. Because of this a split could soon occur between Scottish Unionists and Scottish Conservatives.

“a split could soon occur between Scottish Unionists and Scottish Conservatives” Interesting.

Drummond then goes on to mention the Martin report. emphasising that the choice now facing Scotland is between the status quo and independence. “There is a very clear warning here that we are entering a phase of “hyper-Unionism”. A move away from a somewhat limited cooperation between the nations to a wholly dictatorial approach by Westminster.”

The third article is by Andrew Tickell: Devolution is over – it’s time to face up to the new reality He starts by quoting from Professor Martin’s report:

“The choice is basically this: Does Scotland want to be a small, independent nation, likely back in the EU but with new barriers to trade and travel with the rest of the UK; or does it wish to remain in the UK, with its own powers over some areas but subordinate to the will of the English majority on others?”

Andrew Tickell mention’s Martin’s pessimistic assessment that “Boris Johnson’s room for manoeuvre is limited, and the UK Government now faces a simple choice: “whether it will try to maintain that Union through force of law, or to win renewed consent for it in people’s hearts and minds. It is one or the other.”

He ends with this:

“Colm O’Cinneide put it well this week: post-Brexit Toryism shows every sign of a wanting to return to the concentration of power in a sovereign UK Parliament dominated by the executive, dismantling other centres of resistance, and restoring a vision of national politics where “Westminster served as the dominant locus of political activity, and the focus of democratic life”.

So with those articles covering these reports, not from supporters of independence but from people within the halls of the UK government, I’ll confine further comments to one area.

Martin expressed surprise that in the wake of 2014 the U.K. govt has done nothing to introduce legislation, as Canada did after the Quebec referendums) delineating (and curbing) the holding of an indyref. Whilst this may be true this does not mean that a definite and longterm strategy to combat independence and an indyref was not put in place within the government and Tory party, a more subversive, less public way of fighting the demand for independence. Thinking back there are signs such a strategy has been in place for some considerable time. A boiling the frog approach where confidence in the Scottish parliament is slowly eroded and powers removed, outcomes criticised and politicians defamed. No big bang but a continuous demeaning and discrediting of Scottish politicians and institutions to lessen public reaction and make the removal of powers more acceptable.

Certainly when on 29th March 2017 Annie Wells squared her shoulders and asserted she did not accept Scottish Parliament sovereignty more than a few gasps could be heard.

This appeared to herald a distinct hardening in the attitude of the Scottish Tories towards devolution. They became more determined to rubbish and demean the Parliament they sat in thanks to the list system.

More recently we have had the devolved parliaments ignored and sidelined in Brexit negotiations, the Sewel Convention trashed, and an Internal Market Act passed that gives an excuse, if one were even needed, to overrule Holyrood. And who can forget Boris Johnson’s assertion that devolution has been a disaster – not for the Scots and Welsh but for the right wing Westminster government determined to centralise all power and decision making back at Westminster. No more devolved parliaments showing up the incompetence of Westminster or adopting progressive and inclusive policies at odds with those of the ‘mother of parliaments’.

Boris Johnson has come under fire for reportedly telling a virtual meeting of Conservative MPs that devolution had been a ‘disaster’ in Scotland. Mr Johnson also reportedly described it as predecessor Tony Blair’s ‘biggest mistake’. The SNP and Labour have both criticised the Prime Minister.

So no laws passed to prohibit an indyref but instead a culture and strategy to gradually bring about the end of devolution and therefore of campaigns for independence by other means.

The choice on 6th May is stark as these reports and commentators point out. There is no longer a status quo. The choice before us is now independence or a return to rule by an increasingly right wing , dictatorial Tory government, widely reported as sleazy and corrupt, with the probability of no Scottish Parliament to mitigate its worst excesses.