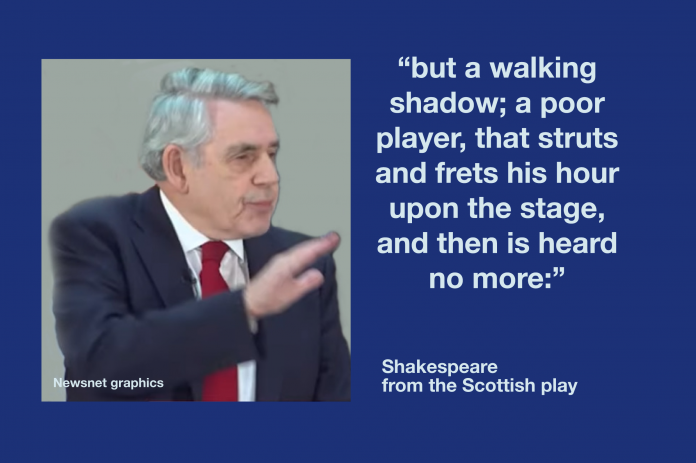 Kirsty Hughes cogent Twitter thread on Gordon Brown’s Day in the Westminster Shadows, taken up North for the day to Leeds, makes crystal clear that there is nothing in his constitutional proposals to deliver meaningfully for Scotland. Kirsty’s Twitter thread is reproduced below with her permission.

1 Gordon Brown’s report doesn’t seem to be going down well in Scotland, Wales or Northern Ireland. So what’s it for? Is it genuinely trying to do something for English regions or is it mainly about soundbites on change, at least in case of Scotland?

2 On independence, Labour’s refusal to countenance a referendum, & its rejection of any mandate coming from another general election win by the SNP, yet insisting a Labour win mandates its constitutional proposals, is hypocritical, plus implies future stonewalling on indy.

4 Somewhere missing in this is England as a whole. Brown’s report talks of a ‘Union of Nations’ but the strangely absent England remains the heart of power & dominance where Westminster still effectively acts as the UK and England’s government. It’s the shadowy elephant in the room.

5 Independence is dismissed as a row between Tories & SNP which Labour will solve by these proposals – even without a majority for Labour in Scotland. And never mind if half or more of Scottish voters support independence, or over 60% of those under 35 years. There is no exit door

6 There’s cursory crumbs from the table of perhaps Erasmus if the EU agrees or participating in the Nordic Council. The EU is ignored. Ironic but telling that Brown’s report came out on the day Starmer said, falsely, Britain wouldn’t benefit economically back in EU single market.

7 Three gaping holes lie at the heart of Brown’s report: 1) England & its dominance at Westminster; 2) any recognition of the UK as a voluntary union & what that means for Scotland’s or Wales’ ability to choose independence; 3) the EU – & Brexit’s damage to the union & its politics

8 In Labour’s focus on English votes, Brexit is accepted, its economic damage ignored, any path back to the single market/EU denied & voters’ changing views ignored, while Scotland is thrown the possibility of being in Erasmus to compensate for no choice of independence in the EU.

9 In the end, the aim of Brown’s constitutional report, Labour contends, is to be major, strategic, full of change. But it is none of these things & seems to be there, in essence, to pretend change, to deny a voluntary union, & to provide soundbites for the eventual election.

Kirsty Hughes, writer and commentator on Scottish, EU & UK politics and from 2017 to 2021 founder & Director of the Scottish Centre on European Relations. She is a Fellow of the Royal Society of Edinburgh.

Gordon Brown, former UK Chancellor and Prime Minister, is perhaps now best remembered by many Scots as the man who promised the earth in 2014 and delivered virtually nothing. Speaking in Midlothian on 8th September 2014 Brown promised “home rule for Scotland within the UK” if the nation votes ‘No’ in next week’s independence referendum and said said the “radical” proposals would be “as close to federalism as is possible” while also maintaining the “benefits” of union. Home Rule, like abolition if the House of Lords, is a policy Labour has been promising since 1910.

What followed the 2014 No vote was far from what was promised by either Brown or The Vow – a joint statement by the leaders of the three main unionist parties, David Cameron, Ed Miliband and Nick Clegg, promising more powers for Scotland in the event of a No vote. Included in The Vow was that in the event of a No vote: The Scottish parliament would be permanent. Far from thatt happening, powers have either been clawed back to Westminster or decisions by the Scottish Parliament overridden.

Then came the Smith Commission chaired by Lord Smith of Kelvin. Hopes of further devolution were quashed when Labour resolutely dragged its heels.

Now we have a report of a Commission set up by Keir Starmer and chaired by our old friend Gordon Brown who has not sat in Westminster since 2015. The response to the report has been far from positive, most believing the opportunity for real change had been shelved

David Clark is a former Foreign Office advisor to the late Robin Cook.

The report’s big ideas for improving devolution in Scotland were:

It didn’t help increase the report’s popularity when it was made clear that Labour intends to push on with Brown’s recommendatiion irrespective of whether people in Scotland vote for the party or the recommendations or not.

Labour will accept a win in the next general election as proof the public wants its recommendations implemented, but refuses to accept that an overwhelming win for the SNP is a mandate for holding a referendum on independence. Such is democracy in the UK.

Aileen McHarg, Professor of Public Law and Human Rights at Durham Law School tweeted her reservations about the report.

Yes campaigner Believe in Scotland’s response to the report was:

“The report says that Labour will not abolish the Scottish Parliament, a condescending statement as they already promised that in ‘the Vow’ in 2014, and the people of Scotland would not accept its closure under any circumstances.  The report says that Scotland would be able to enter into international agreements when it comes to devolved matters. Devolved matters however do not include issues of EU membership, retention of nuclear weapons/participation in illegal wars, trade deals and immigration – all the actual powers that would help Scotland’s economy. Scotland would also have access to regional support through the British Regional Investment Bank. Not only is Scotland not a ‘region’, this is also a policy that is only required because of decades of Westminster mismanagement of Scotland’s natural and economic wealth. In fact, Scotland already has its own National Investment Bank– evidently Labour is having trouble coming up with original ideas for devolution.”

Ignoring wishes of people of Scotland

Believe in Scotland cited five areas where the report fell far short as far as Scotland was concerned – Scotland gains no new major powers, It doesn’t lay a path back into the EU for Scotland, There’s no commitment to the reforms they’ve promised, Federalism is unworkable for Scotland, Labour will ignore the wishes of the people of Scotland.

Akash Paun of the Institute for Government gave his response to the report:

“In the end, the aim of Brown’s constitutional report, Labour contends, is to be major, strategic, full of change. But it is none of these things & seems to be there, in essence, to pretend change, to deny a voluntary union, & to provide soundbites for the eventual election.”

So, real or pretend change?

Or, in a quote from the Shakespeare play whose name must not be mentioned, is Gordon Brown “but a walking shadow; a poor player, that struts and frets his hour upon the stage, and then is heard no more:” Is his report little more than “a tale told by an idiot, full of sound and fury, signifying nothing?”