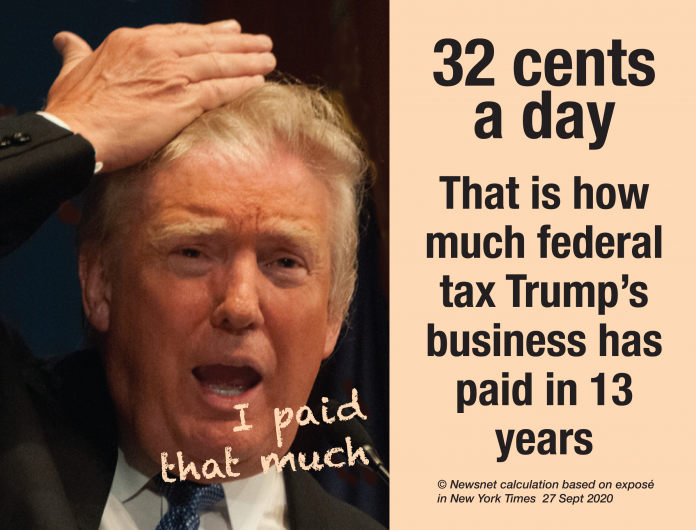 The US election outcome is a matter for the US electorate to decide but for a country that proclaims to be the Leader of the Free World the result matters to all of us in Scotland and Europe. That is why we are giving some coverage to Mr Trump’s tax affairs with thanks to the sterling investigative work of the Pulitzer prize-winning New York Times.

The New York Times exposé on Trump’s business tax payments have set the US presidential election alight like the flames devouring California. Might the President’s tax affairs drown him in floods of violent storms like those which have hit Texas and other southern states this year? Climate change fake news. Right.

According to the New York Times Trump paid just $750 in Federal taxes in 2016, the year he became President and paid another $750 in 2017. The paper has examined 18 years of Trump’s tax records from the information provided to them during which Trump paid no taxes in 11 of those years.

The NYT does not indicate the 11 years in which Trump paid no federal tax. If we add 2016 and 2017 when he paid a total of $1500 then we can calculate the average daily Federal tax paid by Trump’s business for those 13 years.

Trump earned considerable amounts in the years following his period on The Apprentice on which he paid tax totalling almost $95 million. The NYT reported: “He later managed to recoup most of that money, with interest, by applying for and receiving a $72.9 million tax refund, starting in 2010.”

The $72.9 million refund has since become the subject of a long-running battle with the I.R.S.

Trump is the first President not to publish his tax returns and has refused to do so claiming the ongoing IRS tax audit prevents him from doing so. The IRS has said it does not.

Trump has paid “millions and millions” in tax

He has also claimed he has paid millions and millions in tax and that is true from the information the NYT has published. The “almost $95 million” on which he obtained the $72.9 million tax rebate appear to date from some years after 2000 and before 2010 when business was not so good.

In a follow up article the NYT covers Trump’s earnings from The Apprentice “How reality-TV fame handed Trump a $427 Million Lifeline”. The Times reports some months after the first episode in 2004 Trump filed his tax return reporting a $89.9 million loss from his ‘successful’ business empire. The image presented to viewers was Trump “a savvy business mogul with the Midas touch”. He was filmed on his way to the first episode of The Apprentice in a stretch limousine bragging “he was a billionaire who had overcome financial hardship.” Pass round the tissues.

New York Times: “It was all a hoax”

Trump started his empire with over $400 million from his father and embarked on a series of property deals. He invested in casinos which went bankrupt burning part of his inheritance which is perhaps the source of the ‘financial hardship’ claim. Trump then set about building a portfolio of golf courses, owning 17 worldwide at the time of his election to the White House. Golf courses are a major source of his tax losses.

Is Trump actually good at anything? Listening to his press conferences ranting about how great he is does not suggest a positive answer to the question. His narcissistic tendencies have been much commented upon and his claim for $70,000 in hair care as tax deductible shines as one his well known personal obsessions.

The obsession is Trump and when he tells Americans from the presidential podium how wonderful he is and what a great job he is doing, is he perhaps speaking Trump to Trump to cover a deep seated sense of doubt?

How much tax have other President’s paid

As all previous presidents complied with the rules and published their tax returns we know what they all declared in their first year of office. NYT has now provided Donald Trump’s contribution to US coffers So here is the chart:

And as we like statistics at Newsnet here is another wee gem. As both Obama and Trump are outliers we have taken the average paid by Reagan, Bush Sen, Clinton and Bush W which is $144813 then calculated the % Donald Trump has stumped up compared to 3 Republican and one Democrat presidents in their first year of office –