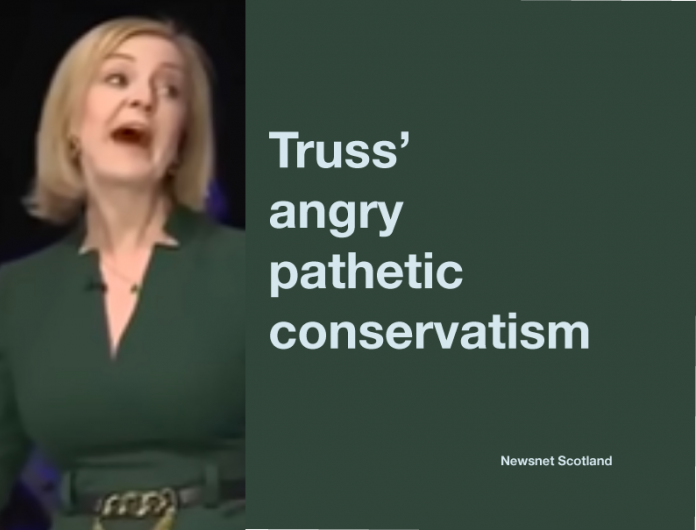 The charges levied on energy bills which impact most on poorer and average households is getting a bit more attention. We have covered this previously on 16th July and 19th July. The only UK paper covering this is the FT with another piece on Saturday.

Now some of the bigger energy suppliers are advocating changes and making the point Newsnet has repeatedly made that these levies should be transferred to general taxation. There is plenty coverage on the ever rising estimation of energy costs now predicted to rise to £5,000 by next Spring from £1971 today for the average household.

Johnson seems to have got a whiff of public anger and sense of desperation although still leaving additional support to whoever is the new PM. Truss has talked about a temporary cut to the green levy that is a small part of the loaded levies on energy and Sunak has indicated a package that might be similar to the one he introduced while Chancellor.

Truss remains stuck on her tax cutting agenda and abolishing the National Insurance rise she voted for so enthusiastically only months ago. That cut will amount to an annual gain equivalent to one modest shopping of £59 for someone on the minimum wage. Truss’ obsession on ‘no handouts’ does not auger well for the future of social security in the UK which might well get the cuts treatment in a steady snip snip operation. That is the logic of her extreme conservatism, if indeed there is any real life logic in her push for votes from a tiny, wealthy, ageing electorate.

We are all out here in the real electorate and see a likely future UK PM who has lost her marbles. In seven years since the Brexit vote, that’s a generation, we have gone from Cameron’s caring conservatism (??) to seamstress May’s stitching of her party’s incompatible conservatism schisms, to Johnson’s jokey blokey conservatism. Now the odds are pointing to a Truss angry pathetic conservatism if she governs as she is campaigning. If that is the outcome the real electorate will trust her as they would a demented viper.

According to Ofgem wholesale gas and electricity costs are around £1,077 with the £900 balance made up of transmission costs, standing charges and a bundle of other fees loaded onto fuel bills for years. These levies are hidden taxes and include the cost of bailing out failed energy companies that should never have been allowed to act as energy suppliers with inadequate financial resources or a viable business plan. Sell cheap and go bust is what happened and Ofgem was not paying attention. Oil and gas prices have always been volatile even if the scale now is beyond what anyone was predicting before Putin pulled the plug on reliable supplies to Europe.

The two things Putin does not like are former parts of the Soviet empire becoming sovereign states and everything about Western Europe which he sees as having diminished Russian influence post WWII. Finally Europe, including Brexit Britain has realised continued dependence on Russian oil and gas has no future and there can be no return to an unreliable bullying supplier cutting supplies to pressurise for an end to sanctions that are damaging the Russian economy and leading to an exodus of businesses and skilled technocrats. 1000 western businesses have shut up shop in Russia and Russians are noticing that the choices available to them are diminishing. Brexit Britain is getting a taste of that.

A bigger crisis than Covid

The crisis the majority of the population is facing over energy costs is more serious than the Covid pandemic which seems to have a bit of a lull but may not yet be over. The impact on mental health and national wellbeing of the energy crisis must not be underestimated. Wellbeing is an important measure of national stability to be seen alongside national GDP. National Statistics are planning to produce regular wellbeing statistics. The GDP predicted growth rate for the UK growth is anaemic and the lowest in Europe, bar Russia.

What are the options?

Rocketing energy prices along with increased food costs are driving inflation to the highest levels in Europe, even ahead of the US which saw a small fall in the latest figures. The increase in mortgage rates is hitting households with an additional whammy and further reducing any disposable income households previously had. The Bank of England needs some discouragement over any further hikes.

Electricity prices are linked to gas prices regardless of the actual cost of electricity generation. Electricity prices should be freed from this artificial connection allowing generators to price supply in relation to the actual cost. This would be a clear benefit to Scotland and other parts of the UK with significant renewable generation. Charges should be based on a proven cost base. Offshore generation provides the lowest generation costs but onshore wind and solar also make an important contribution. Those parts of England with high unit costs and too much fossil fuel generation need to reorient for a more cost effective future with government help.

Both Truss and Sunak appear to support the temporary removal of VAT from energy bills. It is important this also applies to those using oil fired heating in rural areas not on the gas network. This would benefit over 1.5 million rural households who have limited choices. Oil fired heating is the dominant form of heating in N. Ireland. Phasing out oil fired boilers in existing properties is a longer term objective. There is also an argument for making grants available for the installation of wood burning stoves, not pellets, in rural areas.

Recent storms have provided plenty of both softwood and hardwood wind blow as a fuel source and opportunity for increased rural land based employment. This would reduce the use of coal in rural areas. A lot of changes need to be of a progressive nature over the rest of this decade. Some may not like these suggestions for rural areas but wages tend to be lower and poverty levels high. Wealthy landowners account for a tiny percentage of the population in rural villages and towns where public transport is infrequent or non existent.

The biggest change that can be made is to heavily restrict changes to the price cap. That will force a lot of changes on energy suppliers and increased pressure towards low cost renewables. To maintain security of supply means government needs to intervene and that will be expensive in the short run, probably for 2 years. Removing the price cap all together is one suggestion. Another is to limit both the frequency of changes and the permitted percentage increase. It is a time for difficult decisions to ensure national wellbeing and some prospect of actual economic growth.

Contrary to public opinion the surviving energy providers are not making a lot of money. Centrica came in for a lot of criticism for its recent profit report. This did not come from supplying energy to households but from their oil and gas exploration business and their 20% stake in nuclear. Keir Starmer has come up with a plan which misses the means to actually help because surviving energy providers are working on tight margins as they seek to avoid becoming the next energy fatalities. This is a point Richard Murphy also notes in his twitter thread criticism of Starmer’s proposal.

This is the link to Richards thread

We highlight this link from the thread “Then there is another problem. Starmer has only come up with a plan for households, and one that does not help those households most in need, so far. But there is also nothing to help public services and business in this package.” It is well worth reading the full thread. We look forward to hearing Richard’s own proposal. Our view is it is best to make any solution universal and compensate by adjusting tax allowances for higher income taxpayers to deal with the issue of those well able to pay the actual cost of energy.

Many are calling for nationalisation of energy companies. There may well be an argument for this, or forming joint stake holdings. Newsnet is wary of nationalisation by a Tory government given the mess they have made of nationalising Bulb and the potential cost of a large levy on energy bills if the current practice is not changed to moving cost to taxation.

UK Minister calls for RBS to be broken up as job...