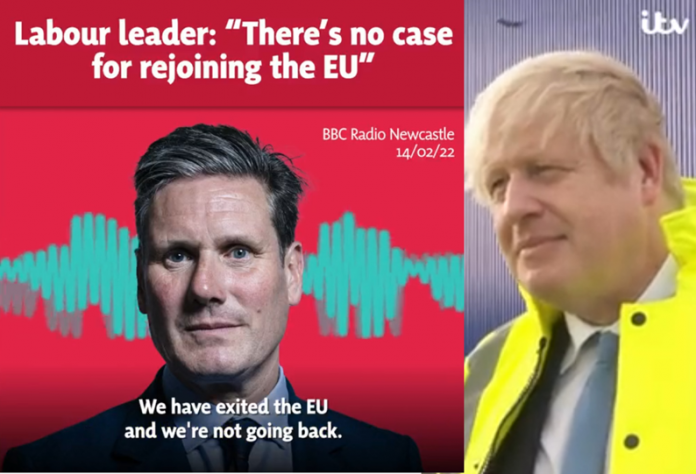 …and no use whatsoever to Scotland

On the hard right we have Johnson smirking to camera on his flying visit to Scotland and on the left, figuratively, Keir Starmer who is probably a decent man but has nothing to offer to Scotland and persistently fails to understand where Scotland’s interests lie.

England has two hard Brexit parties and Starmer could not be clearer that he accepts Brexit is done and he wants to move on…irrespective of the damage. Johnson and Starmer are two peas in the same pod. There isn’t a cigarette paper between Starmer’s English Labour party and Johnson’s hard right Tories, no matter the high cost of a disasterous of Brexit. That many in England are having buyer’s remorse over Brexit has not moved Starmer towards a more accommodating position with the EU is extraordinary. As far as Starmer is concerned Scotland has to swallow England’s Brexit because England decided there is no way for Scotland to pursue a different path. Starmer is entitled to support the union and that is clearly his position despite the clear view in Scotland that we want to rejoin the EU as a sovereign nation in our own right.

Once upon a time the Labour party were supportive of nations that wanted to follow their own course in the world and cast off the dead weight blanket of colonialism. How times have changed as the polity in England has drawn itself into a narrow compression, looking always inward to the bemusement and astonishment of European nations who had once thought better of Blighty.

Starmer can lambast Johnson in the Commons on Partygate, Wallpaper Gate and much else but when it comes to the folly and huge cost of Brexit to the economy, international relations and the UK’s declining global influence, Starmer has tied himself in a Gordian knot to Johnson’s prize objective of Brexit, fully endorsed by the ‘Scottish’ Labour party.

As Alexander the Great demonstrated a Gordian knot can be sliced apart and that is what Scotland must do to become a sovereign nation within the EU, delivering what the people of Scotand voted for in 2016. and have continued to demonstrate by re-electing SNP governments and MPs. Nations planning their own course, whether splitting from a conjoined state or leaving a lost empire, is the history of the 20th century post WWII and unfinished business for Scotland. Democracy demands Scotland has the right to determine its own future direction when it has so little in common today politically, economically and socially with our southern neighbour.

In a recent article The New Statesman posed the question: Has the campaign to oust Boris Johnson collapsed? ‘An Opinium poll of Tory Party members a month ago (the most recent we have) showed that 63 per cent of them thought that Johnson should stay in post despite partygate, with only 25 per cent convinced he should go’ Newsnet responded to a New Statesman tweet about the article with the following observation: ‘That has for some time been the most likely outcome in the view of the Newsnet team. Johnson thrives on his ‘oddity’ and that seems to continue to resonate in the polity of England.’

Johnson’s survival is not a given but the internal opposition seems to have plateaued no doubt helped by the Labour party’s short-term poll surge seeming to be on the brink of stalling. The New Statesman concludes: ‘But until Tory MPs are sure that their Prime Minister cannot rise again, both they and the country will continue to endure Johnson’s faltering leadership.’

At a time of multiple controversies and a legislative programme making voting more difficult, restricting the right to demonstrate, extraordinary expenditure on faulty PPE, £38 Billion on Test and Trace and much more, Labour’s poll lead looks surprisingly anaemic. Those who think Starmer would make the best PM is up 3 points on the Savanta ComRes monthly tracker. Those backing Johnson for PM is also up 3 points. With Starmer on 39% and Johnson on 31% the unchanged gap of just 8% is giving Johnson loyalists hope that Johnson can start to win back support. All eyes are on whether Johnson can either escape a fine over Partygate or even escape the consequences of being fined.

Commentary tends to concentrate on Johnson’s employment record of being fired for lying. Not a habit that Johnson shows any signs of changing. The other side of that reputation is Johnson’s unending ability to survive and get away with lying over and over again. The hair ruffling and denying he lied about anything, if not convincing, appears to large sections of the electorate in England as – well that is just Boris. 59% of Conservative voters say Johnson would make the best PM and 18% say Starmer but that is against a background of an 8% rise for Johnson in the last month indicating Johnson is somehow beginning to claw his way back.

Of Labour voters who stayed with Labour in 2019, 71% back Starmer for PM but 19%, one in five, opt for Johnson. Clearly a lot of confusion around but against the background of the furore over Partygate and the fact this is midterm for Johnson’s government means Tory MPs are beginning to calculate Johnson might just make it to the end of the year.

If Johnson can make it through the summer he will have been PM for longer than both Gordon Brown and Theresa May. The only people who can bring about a leadership election are rebel Tory MPs and there is no sign that the numbers writing to the chair of the 1922 committee are anywhere near enough for now. That might change but it is clear Johnson loyalists have worked steadily to keep the letter flow below the required trigger.

The last YouGov poll of Westminster voting intentions (11/12 Feb) found movement towards the Conservatives and a marked drop for Labour compared to YouGov’s 1/2 Feb poll. The Tories were up 2 points and Labour down 4 points based on likelyhood to vote (6-10) with Don’t Knows excluded. Labour polled strongest in London on 48% with a 25% lead over the Tories and in the North of England with 52% and a 22% lead. The Tories did best in the South of England with 42% leading Labour by 15%. In Scotland the SNP were on 45% with the Tories narrowly second on 19% and Labour on 17%. That gives the SNP a 9% lead over the combined Tory and Labour vote share.

YouGov use just 5 regions. The other one is Midlands and Wales indicating a virtual tie at 37/38 for the Tories and Labour. Sub samples come with a health warning but the data for Scotland is close to long run polling on Scotland and confirming our view politics in Scotland remains distinct and that neither Johnson nor Starmer has anything to offer Scotland. Certainly not the prospect of independence and rejoining the EU.

Embarrassment for Unionist parties as attacks on YesScotland website backfire

Matheson – How will Labour cope with his ill-judged indiscretion?