By Equality Nation and Russell Bruce

The proposed UK Govt Internal Market Bill will create a “level playing field” across the UK for trade negotiations with the EU which will be imposed on Scotland, Wales & N Ireland. Is this the end of the road for Scotland’s high quality food and drink industry? How can Scotland maintain it’s reputation for premium products when the UK Tory Government is determined to significantly lower food and drink standards?

Food and Drink is one of Scotland’s key growth sectors – domestically and internationally – with a broad range of activity from farming, fishing and aquaculture to processing of raw ingredients into products like smoked salmon and whisky.

The sector as a whole has a unique export model, with a deep and successful partnership forged between the Scottish Government, SDI and the industry, through Scotland Food and Drink. The partnership is strategic in identifying priority markets and its delivery is shaped by a single operating plan. It is one of the most successful and internationally recognised public sector/ industry partnerships and is a model we would like to replicate elsewhere.

Food accounts for a growing proportion of exports and sales to the rest of the world tend to be focused on the premium end of the market for seafood, red meat and agricultural products.

In 2018, the top five international export destinations for food exports were:

Of these five countries the US accounts for less than 14% of Scotland’s food exports. Ireland is worth a third more to Scotland than the US. The four other countries (France, Ireland, Spain and Italy) are worth more than six times in food exports than the US.

Yet now the UK government, in its desperate search for trade deals, looks set to irreparably damage Scotland’s food and drink export market by imposing lowered standards across the UK.

With cheap imported food flooding the market, forcing many of our own farms to the wall as they are unable to compete, we will lose much of the traceability we at present have in our food chain. Should a major outbreak of say salmonella occur then it will be much harder to trace the outbreak back to source.

Peter Foster, Public Policy Editor at the Financial Times, today had an article on the proposed internal market. He also posted a long thread on Twitter which was taken up by Threadreader. This is reproduced below.

NEW: Edinburgh/SNP says it will fight London/Tories is they legislate to force Scotland to accept whatever food standards emerge from post #brexit trade deals. This is only start of how Brexit threatens to break Union. Stay with me 1/thread
on.ft.com/2VWpulw

As @Feorlean Mike Russell, Scottish constitutional secretary tells @MureDickie the UK govt plans to enforce the new ‘internal market’ after Brexit risks provoking the biggest constitutional crisis since #Brexit vote in 2016…but why? /2

It’s not hard to see how that can create problems.

Because doing these trade deals, not just with the US, but also with the Asia-pacific CPTPP countries (like Aus, NZ etc) is going create hard choices on divisive stuff like GMOs, Pesticide residues etc /4

You’ll have heard about “chlorinated chicken/hormone-raised beef)…but that’s really only the tip of the political iceberg on trade, as the govt discovered recently with 1m signatories to the that forced to beat a tactical retreat/3

But source with knowledge of the plans for the UK Internal Market Bill (White Paper, we hear in the next week or three) speak to the fact that Beis/DiT do NOT want to have hands tied to do these deals – that’s ringing alarm bells./6

Farming, fishing conservation, environmental and animal welfare groups all note that despite the “warm words” on standards/welfare, the government is thus far allergic to enshrining those commitments in law – remember the block of amendments to Agriculture Bill? /7

So why does this threaten to ignite the constitutional powder keg?

Well, because when UK was an EU member, it’s ‘internal market’ was effectively the EU’s single market, with shared rules for everyone.

Then Brussels imposed the discipline. After #Brexit London must do so /8

This would be challenging at the best of times, but when the devolved government is your implacable political opponent, as the SNP are the Tories, that is clearly a recipe for serious friction and tension as we head into next year’s Holyrood elections./10

As new standards emerge – say using GMOs, or accepting cheaper imports with higher pesticide residues, or egg powder raised in batter cages – the Scottish/Welsh government is in a perpetual bind: accept them, or refuse them (and get undercut) /11

So cites example of where UK does a trade that rules out minimum alcohol pricing (which the US, say, might say is anti-competitive, but is a Scottish govt policy) then to enforce the deal, the UK will have to legislate over heads of Scottish government /12

And these are live issues – in the leaked reports of 2018 US-UK exploratory trade talks, US negotiators did bring up the question of how the deal would land in the devolved administrations. (h/t for that one)…and the UK basically said ‘we’ll get back to you” /13

Well, now the #Brexit rubber is starting to hit the road. Parts of this government are very happy to pick the fight with the SNP as @michaelgove showed at weekend) dismissing the SNP anger as “confected” when it cuts to the heart of devolution/14

But in the nature of this #Brexit there is ridiculously little time to implement a whole host of complex and delicate changes – just ask the hauliers, the logisticians, the chemical, pharma, and automakers – but we crash onwards. /16

None of which is to mention Northern Ireland and the other volatile bit of the Union which was, in theory, ‘fixed’ by the NI Protocol. Whether, in practice, that is the case will depend on its implementation, and how the politics of that lands in NI /17

The danger, as I see it, is that if the London govt treats Scotland with the disdain bordering on contempt that it has treated Northern Ireland these last four years, that accidents really might happen. FWIW I hope they don’t. /18

You can read Mike Russell’s letter to Michael Gove here, which elucidates some of the plans which are rattling the devolved administrations – but will also raise BIG Qs about UK govt’s future real intentions standards/doing trade deals. /19 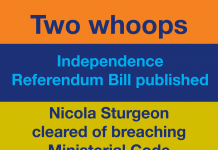