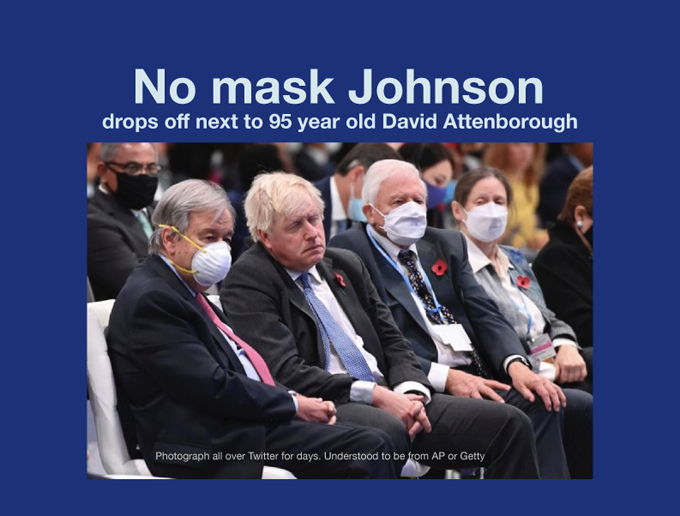 The image of Johnson breaking the law in Scotland during COP26 has gone viral. In England it could be legal, in Scotland it is not. That it is still be legal in England is down to Johnson and Tory politicians ignoring the advice of health professionals that the mask mandate should be reinstated. Commonly referred to as Plan B which Johnson told CNN is not under consideration, when all evidence points to it being beyond urgent to become Plan A.

The rules issued for COP26 are quite clear and the exceptions clearly set out. Johnson sometimes wears a mask and not at other times. Seated in close proximity in a theatre setting is not one of the exceptions as we and the irate public clearly understand.

Such irresponsibility on the part of a UK Prime Minister must be without precedent and speaks volumes about Johnson’s belief that rules and laws to not apply to him. Somehow he thinks he is ‘special’ when the only thing that is special about him is an overwhelming tendency to act the idiot.

Strangely, so far, Tory support has held up in England which probably says more about the ineffectiveness of Starmer’s Labour party. Apparently some people think Johnson is funny. If you want a laugh at a clown’s antics go to the circus.

Other World leaders followed the COP guidelines in Scotland and the advice of professional health advisors thoughout the UK and beyond. Disrespect for Covid requirements in Scotland is just one aspect of Johnson’s unacceptable behaviour. He also showed deep disrepect to other World leaders and COP delegates.

Yesterday Sir Jeremy Farrar resigned as a member of Sage over continuing grave concern that the government continued to make mask wearing ‘optional’ in England. The only one of the 4 nations ignoring advice. Even the Daily Mail reported on his resignation whilst attempting to do a hatchet job on Jeremy Farrar’s reputation.

Johnson stuttered through an interview with CNN denying that the UK has the worst rates of Covid in Europe despite evidence to the contary. A clear example of Johnson’s continuing Trumpain denials. If the evidence doesn’t fit with ‘requirement’ it is false. CNN’s Christiane Amanpour patiently and quietly pulled the PM’s stance apart.

Challenged about not wearing a mask CNN reported “Johnson also struggled to explain his decision not to wear a mask at all times while sitting next to 95-year-old environmentalist David Attenborough during the summit on Monday.”

It is all very well to emphasise the UK’s vaccine rollout but Johnson knows very well younger age groups continue to catch Covid in significant numbers and those infections work there way up to older vaccinated age groups, resulting in hospitalisation and an unacceptable death rate.

A wee reminder about our fundriser.

We expected it to be slow at this difficul time but to continue for the long term but we could do with a bit more. Our immediate target is 10% of budget which would mean an additional £250 to help keep us going.

Paste the link below into your browser or go back to the main page and click on the DONATE buton on the Newsnet masthead.