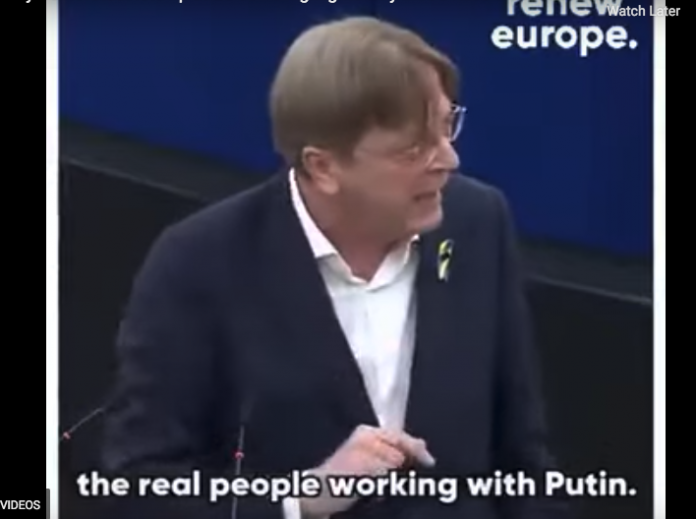 Verhofstadt calls for sanctions on the 6000 people around Putin. Most of them have the same KGB background as Putin and are known as the Siloviki. More importantly we know who they are because the foundation of Alexei Navalny has made the list available. These are the people who control Russia in Putin’s name. They are more important than the oligarths flitting around the West that have been the centre of much attention and increasing sanctions. Fine, sanction Putin’s daughters because that makes the news. The Siloviki are interested in two things – power and money. If their money is threatened their power leaches away and with it their continuing loyalty to Putin. They know, even if most Russians don’t, ‘the war‘ has not gone to plan. Unlike the oligarths the Silovoki keep their money in Russia which means sanctions makes their wealth vulnerable as the Russian economy comes under increasing pressure.

Putin has moved to plan B to control Donbas and hold a southern link through Ukraine to Crimea. That will never be the end of his ambitions, just a staging post to control all of Ukraine. Verhofstadt hit out at Germany for their slow and over-guarded response. Ostpolitik is dead. Germany’s new coalition government took a big step in backing Ukraine and have sent a great deal of humanitarian aid but have been slow and over cautious on the supply of arms.

There is no dialogue to be had with Putin. He has laid out his objective to establish a Putin the Great Imperial Russia absorbing all the countries that were once part of greater Russia. Russia and Putin have form. Chechyna 1999-2000, Georgia 2008, Crimea/Donbas 2014-2022 and Ukraine 2022.

Social media and news reports are filled with horrific images of the death and destruction left behind by Putin’s retreating forces. NATO must not engage directly in the conflict. Ukraine’s forces are very capable but will need to be constantly resupplied. Russian losses are rapidly approaching an estimated 20,000 dead. That has never been an issue for Russia who have long poured troops into every conflict they have been engaged in.

Reports are now emerging of mobile crematoria being used in Mariupol to try to hide civilian deaths from being recorded as war crimes. These units were reported to be in position for the invasion north of Kyiv. The Ukrainians dealt with the invading forces and the crematoria units have been moved to the east. Russia will not be able to hide for ever the barbarity of its forces and their Donbas supporters in using such methods to hide war crimes. Russia will and must be held to account.

Predicting the future amid such chaos and human suffering is imposible. What we can say is the Ukrainians are determined, they are gaining some ground but this is far from end game. Provided the Ukrainians are continuously supplied with the weapons they ask for can only suggest many months more of war and the continued suffering of the Ukrainian people. Putin backng off if his eastern assault runs into problems is somehow unlikely. That the Siloviki might decide to remove him is highly problematic. Even should this happen, what might follow is a bigger unknown. Russia is not on a journey towards democracy.

On top of all the issues now facing every country – inflation, rising food and fuel prices, rising taxes and interest rates, and in the case of the UK the idiocy of Brexit, ways must be found to support Ukraine. There is no short cut.

Nina Lvovna Khrushcheva is a Professor of International Affairs at The New School in New York. She is also the granddaughter of of former Soviet Premier Nikita Khrushchev. Nina described her grandfather as an autocrat but not a despot. He did invade Hungary in 1956 to crush the rebellion there and invade the Czechoslovak Republic to end the Prague Spring in 1968, led by reformist Alexander Dubček. Khrushchev was also reponsible for the Cuban Missile Crisis of 1962 which was eventually resolved between JFK and Khuschchev and the Moscow-Washington hotline established.

Whether Nina Khrushcheva is right that her grandfather was not a despot matters little today. There is no doubt Putin is a despot. Despots are unpredictable but they also make big mistakes as Putin has. His actions against Ukraine have led to Sweden and Finland considering NATO membership and NATO reinforcing security in European NATO countries.

Far from being a match for NATO, Russian forces have been exposed as largely ineffective so far in what Putin calculated would be a two day conquest. Putin was credited with a mullti-option game plan. His options have narrowed with Plan B. If that fails Putin fails. Ukraine, NATO and Russia are entering a new phase which will be brutal on Ukrainian soil which is as much as we can be certain of in the weeks and months to come.