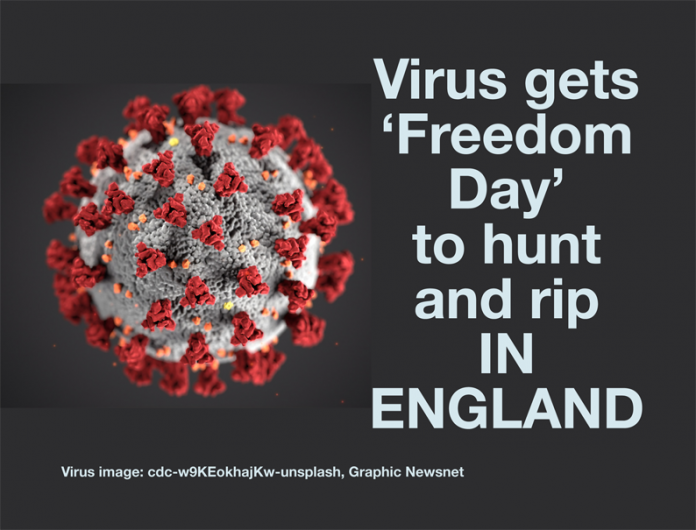 UPDATE: WHO Weekly report for period 12th to 18th July shows UK has the 2nd highest rate of infectivity after Indonesia and ahead of Covid hot spots Brazil and India, in third and fourth places respectively

Despite all the warnings from 1200 medical professionals and amazement around the world at Boris Johnson’s foolhardy plan to lift all restrictions in England today, he failed to heed the warnings. In particular, Johnson failed to take a more cautious approach over legal requirements for face masks and social distancing choosing to rely on personal responsibility when there is known resistance to mask wearing and maintaining social distance in some sections of the population. Most supermarkets are insisting on shoppers wearing face masks but they do not have the force of the law in England behind them. Scotland and Wales have ensured the legal requirement for face masks and social distancing mandates.

The trend of rising infections has been clear for some time. More than enough time for a rethink of a glib Trumpian stance that was always in danger of being a hostage to a dynamic virus. WHO publish weekly epidemiological updates. The last one published on 13th July covered the period 5th to 11th July and shows that the UK had the highest rate of infections in Europe at over 300 per 100k of population.

The UK was already flashing dark red, along with Portugal, in the previous week’s epidemiological report covering the period 28th June to 4th July. Those who choose not to take mask wearing seriously pose a danger not just to themselves but to friends, family and their immediate community. Statistically older age groups are in greater danger of more severe reactions and risk of infection being fatal.

We have an immense level of data made available on a daily basis and this shows a worrying deterioration for the situation in England. In the last 7 days England has seen infections rise from 170,422 in the previous 7 day period to 224,385 – an increase of 32%.

Scotland had an earlier spike in infectivity, as we previously reported and has since been showing an encouraging downward trend in infections as our table shows

A note of warning on % changes. The key figure is infection rate per 100k of population, so although Scotland showing a 23% decrease is welcome, 309 per 100k is still a concern. The % rises for both Wales and NI are from a lower base compared to a longer term rise of infectivity in England, shooting steeply upwards from late June.

Johnson had all the warning necessary to keep proper safety guidelines in place with legal backing. Currently 56% of infections in England are in age groups under 29 and although less likely to become seriously ill that has not prevented some in low age groups requiring hospitalisation and suffering from long Covid.

Johnson and Sunak turned up on a mysterious pilot scheme that did not require them to self isolate. The public backlash was such that they rapidly performed a u-turn. The new Heath Secretary was the cause of their requirement to self isolate. Meanwhile his predecessor opted for a quieter life having resigned to spent more time with his mistress. You couldn’t make this stuff up.

Prof Ferguson, who sits on the Scientific Advisory Group for Emergencies (Sage), told the BBC’s Andrew Marr Show it was “almost certain” that the UK would reach 100,000 cases and 1,000 hospital admissions per day as almost all legal restrictions on social contact end in England and school holidays begin. “Covid cases could hit 200,000 a day in the UK this year and cause “major disruption” to the NHS, according to the scientist whose initial modelling helped shape Britain’s coronavirus lockdown strategy.”

NHS excluded from return to normality

Such an impact by an experienced epidemiologist causes great concern with multiple negative impacts on the NHS. First and foremost is the impact on the morale of doctors and nurses who have been working to catch up on operations and treatments postponed or not identified due to previous high rates of Covid hospitalisation. The return of capacity to deal with NHS normality, including elective surgery which is the first casualty of a pandemic upsurge, looks to be severely compromised through Johnson’s ‘Freedom’ gamble.

WHO cover the four main variants in their weekly reports. Alpha (the Kent or English variant) has been identified in 178 countries – up 6 in latest report. The Beta variant is in 123 countries (up 3), the Gamma variant now in 75 countries (up 3) and Delta, formally the Indian variant, that quickly became a major source of concern is now in 111 countries (up 15)

It has always been known that the virus would mutate and continue to do so. Delta was never likely to be the last, but Johnson also ignored that in his miscalculations. A variant has been identified in France that appears to evade tests, just 8 -10 cases have been identified so far. Work is ongoing to determine if it could pose a major threat. There are hundreds of mutations but most of them are minor with limited variant significance.

Travel and the LNER fiasco

This was not an accident but a deliberate plan to force English Covid freedom rules on Scotland. LNER is owned by the UK government’s Department of Transport. It has all the marks of Johnson’s aim to destroy devolution by ignoring the Scottish Parliament and the laws of Scotland. To Johnson devolution is a disaster because there are other voices which do not accord with his. The fact that they are listened to and respected for their competence in governance, including by many in England, is a thorn in the side of this autocratic blusterer with Churchillian fantasies.

Covid laws, Freeports infrastructure, investment and more – Scotland will get what Johnson decides without consultation or agreement with the Scottish Government and the Scottish Parliament. Freedom Day may be a Johnsonian ill thought out ploy but its potential to engage in conflict with the devolved nations is almost certainly a key element of current unionist strategy.