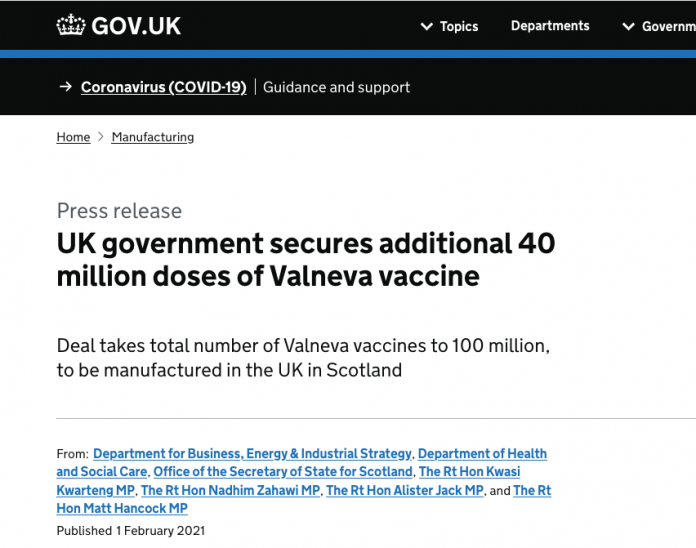 The contracts the UK government issued to Valneva for the vaccine they were developing were announced to great fanfare as another union dividend for Scotland. Our headline graphic shows the UK government news release on the increase in the vaccine order they placed. Just 8 months ago UK ministers were queueing up to pump out statements extoling the awarding of a further contract for 40 million Valneva vaccines, bringing the total on order to 100 million.

“This deal is an endorsement of the UK Government’s strategy of investing in vaccine development and in the skills of the Scottish life sciences sector.

“I pay tribute to the team in Valneva’s new Livingston manufacturing plant. If the vaccine is authorised by the health regulator, their expertise will play an important role in making the world safer from this virus.”

A month ago the UK government cancelled the contract and therefore the claimed union dividend.

On the 13th September the UK government cancelled both contracts claiming Valneva was in breach of contract when the vaccine was just at the third trial stage. They also claimed the vaccine would not receive approval, a claim they had no way of substantiating. Livingston MP Hannah Bardell said the announcement came out of the blue for Valneva, which is undergoing a major site expansion in Scotland.

As we now know the Valneva third stage trials went well with the media reporting that efficacy exceeded the Astra Zenica vaccine. Results released by Valneva on Monday suggest that the Covid vaccine may trigger a stronger immune response than the Oxford/AstraZeneca jab. It can be stored in a normal fridge which simplifies distribution and also makes it an ideal vaccine for use in developing nations that are well behind in rolling out vaccinations. That is a concern in an interconnected world where the UK has opened up in the interests of trade over health protection.

The results of the third stage trial take Valneva nearer to gaining regulator approval although that may be some weeks or months away. Different authorities – the UK medicines regulator, European Medicines Agency and the US Food and Drug Administration, will all no doubt look at authorising this vaccine. The more vaccines there are the greater the production output. Greater choice in vaccines in rollouts extends the potential tools and protection for populations. Vaccination programmes are expected to become annual events as Covid19 is far from being conquered with the UK having the highest number of cases compared to other countries. This graph shows some country comparison per 100k of population over the last 7 days.

This is a stark graph for those who mistakenly believe it is all over. After a worrying spike Scotland is seeing the number of cases fall but there is no cause for complacency. Case number per 100 thousand have been rising strongly in England in recent days with increasing pressure on the NHS there. Some easing in Scotland is not a cause for celebration wth winter and the flu season almost upon us. Keep wearing a mask.

A new variant, Delta Plus has been identified. Scientists are monitoring the situation to understand what the implications may be. The Scottish Cabinet discussed this and said there was a need to monitor the possible implications.

The EU had already ordered 30 million Valneva vaccines earlier this year. France and the EU are understood to be considering taking up the capacity the UK has dumped. Valneva SE is a French biotech company specialising in vaccines based in Pays de la Loire with manufactuing units in Scotland, Sweden and Austria.

Scottish jobs are now more likely to be saved and Valneva investment and research rewarded with contracts from the EU and individual EU countries.