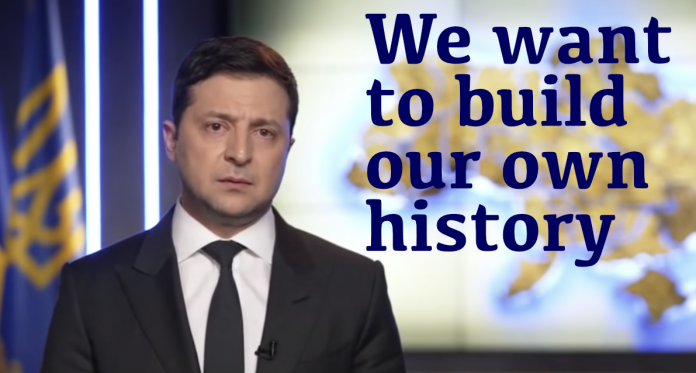 Volodymyr Zelenskiy makes a direct appeal to the people of Russia. Wanting to build your own future is a natural ambition of all nations. It is particularly significant at this time when Putin is determined to impose his own vision on the future history of Ukraine.

What Putin fails to understand is that if centralised, domineering and oppressive empires were such a wonderful creation that everyone would be clamouring to join them then he is on the wrong side of history and has no appreciation of the long term emergence of the sovereign nation state as a fixture of modern history.

Ukraine is just the latest of the old Soviet satellites where Putin is seeking to crush independence and democracy.

Putin has a record of sending Russian forces to bolster autocratic rulers in other former Soviet republics. Svetlana Tikhanovskaya, the 38-year-old presidential candidate in the 2020 elections in Belarus claimed victory in a disputed election. Belarus’s embattled loser president, Alexander Lukashenko, begged Putin for help to put down the protests and avoid a change to a democratic government. Putin sent in his thugs to quell the demonstrations and is now using Belarus as an additional base to launch the current round of attacks on Ukraine.

In 2008 it was Georgia and images similar to what we are seeing from Ukraine today hit the news bulletins. The Russians are still occupying Abkhazia and South Ossetia regions of Georgia 13 years after the supposed end of the Russo-Georgian War. This was the first European war of the 21st century. Putin has form but may be overreaching himself.

Kazakhstan, one of Russia’s closest allies and a southern neighbour, is denying a request for its troops to join the offensive in Ukraine, NBC reports. The former Soviet republic also said it is not recognising the Russia-created breakaway republics upheld by Russia’s president, Vladimir Putin, as a pretext for its aggression in Ukraine.

The US offered to get Zelensky out of Ukraine. Zelensky pointedly turned the offer down replying, “I need armaments not a ride.” Responding to public opinion in the west the US are now sending $350 million in armaments to Ukraine. Germany is also coming off the fence and appears to be about to add Swift to their list of sanctions and in an even more significant move are ending Germany’s historic ban on arms exports and sending rocket propelled grenades to Ukraine. These are very effective against tanks.

Ukrainian president Volodymyr Zelenskiy in an emotional plea to the Russian people said “Neighbours are always enriching each other culturally. Yet, that does not make them one entity, and does not separate people into “us” and “them”. There is no doubt that since this statement Yelensky has grown in stature by remaining committed to standing up to Putin’s bully tactics but there is also no question that great difficulties lie ahead for Ukraine.