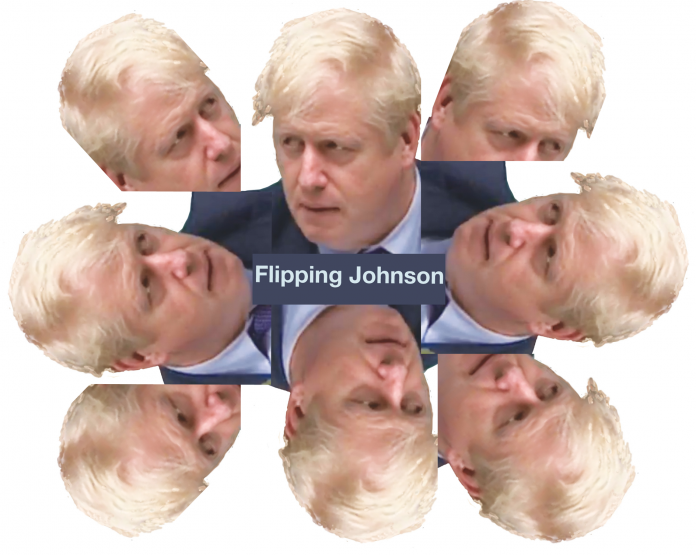 For sometime England has been the odd one out of the 4 nations by abandoning mask wearing as a legal requirement in indoor public places, relying during this time on a ‘common sense’ approach on the part of the population. Unfortunately this has allowed the anti maskers to do as they liked including those on the Tory benches at Westminster who have consistently displayed irresponsible behaviour in the Commons to the concern of staff and opposition members.

A theme taken up by Tories in the Scottish Parliament on a daily basis, urging the Scottish Government to follow the way things were being done in England. Well it turns out Westminster following closer to what Scotland and the other devolved nations have been doing is a much better model.

In the name of ‘Freedom’ Tory MPs and many in the population following their bad example have endangered significant sections of the population and filled wards with more Covid patients than was necessary. Spreading harm to others and exposing yourself and others to infection is not a ‘freedom’ but a failure to act in the best interest of self, family, community and the NHS.

We know from concerned and angry reports from those on the frontline that selfish maskless anti-vaxers are filling NHS beds and denying those waiting delayed treatments the chance to finally receive the treatments they need.

Sajid Javid has claimed they have acted swiftly to meet the threats from the new southern Africa variant. Certainly in relation to how far behind the curve this Tory government has been previously this was a welcome indication they have learnt some lessons from past failures to act timeously in the cancellation of flights from countries where the new variant has been detected.

But did they do all they should have? The answer to that is decidedly NO. Travellers on flights arrivng at Heathrow prior to the restrictions coming into effect were not separated from other passengers and allowed to mingle and travel onwards without due care being required. Even if the Westminster government had not realised this flaw in their planning it was incumbent on Healthrow to have more care for the majority of their passengers.

In his Marr interview Javid consistently ignored this major flaw when Marr pointed out the Netherlands had separated passengers from southern Africa and had tested them for Covid. 10% of passengers were positive for Covid, 61 in total, and were immediately transferred to a hotel used for isolation of Covid infected passengers. A sensible precautionary principle that could have been implimented at Heathrow.

The Westminster government has become a slow learner which is a big improvement from previously, but that it never considered adopting the more precautionary practice used in the Netherlands before the flight ban took effect means we have a UK government still short of understanding what a best practice approach should have been in the circumstances. Javid continued to avoid Marr’s question by repeating the partial early action they did take.

Following up after these passengers had spread throughout communities was too late. Action now to follow up and trace them and those they have already been in contact with, is too loose a model to minimise the potential spread of the new Omicron variant. The Guardian reported: “Recent arrivals from southern Africa will also be tracked down and offered tests in an effort to avoid the introduction of the variant.” Not very reassuring given the high probability it is already circulating in numbers beyond the few so far confirmed.

Nicola Sturgeon made clear in her interview on Marr that Scotland has not changed advice on working from home whenever possible, and that masks should be worn in hospitality venues when not seated for eating and drinking. England is not doing this at present. Scotland has vaccine certification in place, as does Wales with N.Ireland introducing it tomorrow showing Engand is still behind the curve.

Asked about the Border the First Minister made clear we had an open border as part of the UK and had not the powers to close cross-border travel but made clear advice would be given on this if that was felt to be necessary in the weeks to come, as has happened previously.

Marr in his interview with Nicola Sturgeon went his duster on a report that Scotland had 300 deaths due to people waiting longer for treatment. This was a UK wide study with data extrapolated for Scotland. Nicola explained waiting times had increased beyond targets and what was desirable due to the impact of the virus, as they have elsewhere in Europe. Marr somehow contrived to suggest it was unique to Scotland when stories of even longer waits are reported on a regular basis south of the Border.

People understand this very unfortunate impact of the pandemic on the National Health Service. It does not make the implications any less heart felt. It is a strong message to the persistent maskless and anti-vaccers who continue to end up needing treatment to the frustration of health service workers infuriated at their unnecessary selfishness.

There will not be a normal pre-Covid Xmas and Johnson and Javid are irresponsible in suggesting this will be the case. A post Christmas spike was the outcome last year and some level of spike is probable again with increased generational mixing. The smaller the spike is in January 2022, the sooner we can expect normality to return. As Javid admitted the full implications of Omicron will not be better understood for another 2 – 3 weeks. That’s 4 days before Christmas and too late to urge people suddenly to change plans that might be less than the safest options they should have followed. Scotland, the UK and Europe have older population structures than southern Africa and it will be well into January before the impact the Omicron virus has on older more vulnerable age groups is known.