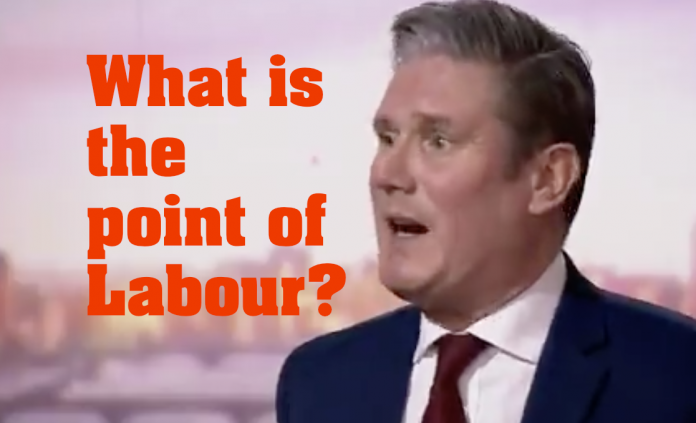 The leader of the UK Labour Party caused a bit of a stushie yesterday in Scotland with his comments on the Marr show and in the print media, his comments seen as a further indication that Labour is merely limping along on the coat-tails of the Tories, offering no effective opposition at Westminster to a government moving ever rightwards.

The Right Honourable Sir Keir Rodney Starmer KCB QC MP, said on Wikipedia to identify as a socialist, was, prior to his election in the 2015 general election, a defence lawyer specialising in human rights issues. In 2002 Starmer had been appointed as a Queen’s Counsel, in 2008 becoming Director of Public Prosecutions and Head of the Crown Prosecution Service in England, roles he held until 2013. His role as Director of Public Prosecutions was rewarded by Starmer being appointed Knight Commander of the Order of the Bath (KCB) in the 2014 New Year Honours.

During his leadership contest in April 2020, in the wake of the party’s election defeat when Jeremy Corbyn relinquished his post, Starmer made a commitment to free movement of people in the European Union, one of his ten pledges being that he would defend free movement. Yet in his Marr interview he reneged on this, saying there was no scope for renegotiation, no case for rejoining the EU, and he would not fight to bring back free movement.

“I don’t think there is a case for re-joining the EU…that is not realistic” Starmer went on to say that the treaty that had taken four years to negotiate wasn’t up for grabs and the EU wasn’t going to say let’s start all over again. Instead, he said, “We’ve got to make that treaty work.”

This will come as a huge disappointment to many Labour voters who pinned their hopes on the party renegotiating the trade deal and bringing back freedom of movement and a closer alliance with the EU. Some on social media have accused him of being weak, of changing his mind as often as Johnson, of going full Tory. Others asked what was now the point of Labour when it refused to be a party of opposition and provide voters with a distinctive choice rather than Tory blue or Tory red.

Labour voted for the deal in the House of Commons with Starmer, the QC and human rights lawyer, saying it was either that or voting for no deal. This was the Tory line and was untrue, yet Starmer was happy to go along with it, putting workers’ rights and a myriad of other rights at risk as the right wing Tory government gurgles over what it intends to do to remake the state and the UK. This is Labour continuing to support the Tory Brexit when the majority of people in the UK now believe it was wrong to leave the EU.

The details of the UK/EU trade deal will be overseen by a series of committees over which the UK parliament has no sway. So much for democracy and taking back control. It’s also a deal that comes up for review every five years, yet Starmer appears to have no intention of campaigning for changes in these reviews. He’s again just going to follow the Tory line.

But what really triggered Scottish anger was Starmer repeating that he did not favour another “divisive” Scottish independence referendum though he conceded the status quo with regard to Scotland wasn’t working. That is apparently why he favours a constitutional commission. Another talking shop to add to those which have come and gone over the decades with little, if anything, to show for them. Another exercise in kicking the question into the quagmire to stifle discussion and hope the question sinks beneath the surface for another few decades.

In Starmer’s view a “divisive” independence referendum ‘is not the way forward’ for Scotland’. Instead he insists a positive case can be made for the union. That brought out a few laughs and derisive comments. We have waited centuries for a positive case for the union, poked and prodded for one during the 2014 referendum, and now the Labour leader thinks it can be made by denying Scotland a referendum when seventeen consecutive polls have indicated this is what people in Scotland want, and in which they would vote Yes. The union’s colonialist tendencies were seen to be on show, underlining Scotland’s democratic deficit and the crying need for independence.

Starmer insisted it isn’t independence that is Scotland’s priority but the economy, the NHS, and public services. If the Labour leader had any knowledge of Scotland he would realise that it is threats to these and to the NHS remaining free at the point of use, plus a growing democratic deficit, that are precisely the reasons why we need independence, and why we need it as soon as possible before the Tory government, whose excesses and incompetent blunders he fails to curb, drags Scotland back to the dark ages.

In the 2016 Brexit referendum Scotland voted 62% in favour of remaining within the EU. Now, having been forced out our only route back is through independence, but Starmer and his Labour party (with only one MP in Scotland) have made clear their hostility to a democratic vote on independence. They are happy to ally themselves with the Tories and throw democracy out the window. This week our television and computer screens showed us graphic images of where a denial of democracy and reality and a surfeit of lies by powerful politicians leads.

Starmer also criticised the Scottish NHS for being on its knees – a mindless comment given the numerous problems experienced in England where many hospitals are overwhelmed and are sending patients around the country in search of a free bed. This comment was made by the leader of a party formed to give voice and support to working people, yet Starmer is happy by this utterance to slate the many thousands of NHS and other staff in Scotland who are working horrendous hours in heartbreaking conditions to save lives. Labour has truly moved a long way from its origins. Starmer is playing the Tory game of barefaced lying to undermine Scots and confidence in their institutions. Despicable and tawdry politics.

So what now is the point of Labour?

One suggestion is that UK Labour is treading this road as it has calculated the party needs the return of the red wall voters in northern England more than it needs Scottish seats, with the probability of winning more Scottish seats than the one already held remote, so no point in wasting time chasing them. In other words, Starmer is doing what he believes he needs to do to win in Brexit-voting England, much of which knows little about Scotland and devolution.

This is a strategy underlining the reality that a Labour government at Westminster will never be the answer to Scotland’s problems, its challenges, and that we need to take a different route to a progressive future.

Then again, there’s the likelihood Scotland will be independent or well on its way there before the next Westminster Election. So as far as Starmer is concerned Scotland obviously no longer figures in his thinking.