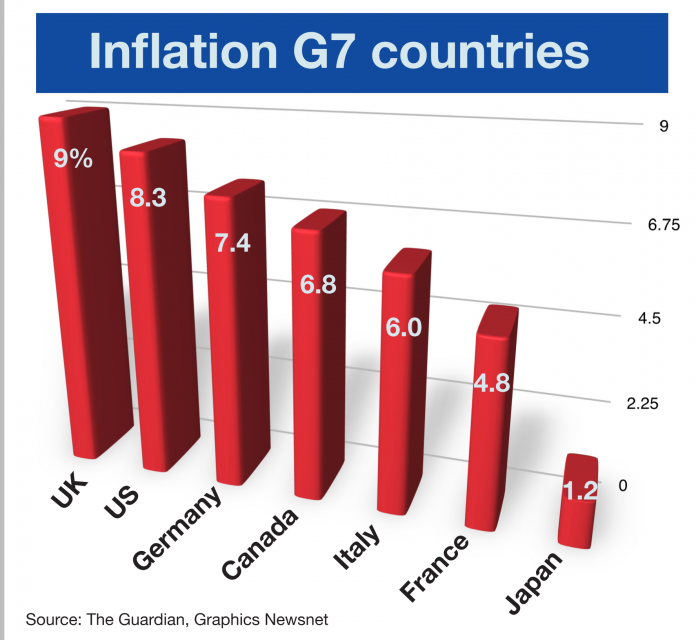 The headline graphic presents a picture of inflation in G7 countries at very different levels and in this article we will try and unpick some of the reasons behind why different countries appear to be fairing better than others.

We are all acutely aware of the huge increases in energy, fuel and food prices squeezing our so called ‘disposable’ income and the chart clearly shows UK inflation is the highest in the G7 with some predicting it could rise to 10% before the end of the year. The lower your income the higher the impact of these essential supplies. The higher your income the more absorbable are these increases.

The Bank of England expects inflation to increase to 10% later this year, to stabilise next year and fall towards their 2% target within 2 years. That does not mean energy prices will have fallen back towards pre-Ukraine invasion levels. It simply means the upward price pressure may have stabilised and worked out of annual inflation levels.

The high UK 9% rate is significant compared to the three EU countries. Germany is a major manufacturing nation with significant industrial energy demand. Germany is facing significant challenges in replacing Russian oil and gas but is making steady progress. Germany cut fuel tax by up to 30 cents which equals 26p or five times the the 5p cut Sunak made.

The UK, US and Germany have all their major electricity energy providers in the private sector. France and Italy have significant levels of state ownership. EDF is 85% owned by the French government which enabled Macron to restrict the increase EDF could charge for electricity to 4%. Although increasingly into renewables EDF’s nuclear power stations produce 72% of France’s electricity. The highest share of nuclear energy in the world.

Nuclear energy is expensive so how was this possible? The costs of new nuclear just keep rising but the old power stations nearing end of life have returned their capital costs. Squeezing a few more years out of them is cost effective if the costs of maintenance are less than the value of the power generated. France, like the UK, only has 1 new nuclear power station under construction at present. Macron also indicated before the election he intended to take the remaining 15% of EDF into state control.

Macron realised he had to do something to keep electricity costs down. EDF simply was not given the option of making the huge profits generators in the private sector in other countries were able to. Whenever EDF needs more money for investment the French state is always there to provide, as was the case in a recent rights issue to bolster their working capital.

It was very much an opportunity of this moment in time. There was no such opportunity for the UK because Westminster has long sold off everything the state owned.

Will Sunak finally tax the high profits of energy companies raking in exceptional profits? Italy introduced a 10 % tax in March and in early May increased this to 25% to pay for help with the energy bills of both consumers and businesses. Italy’s latest 14 billion euro support package comes on top of a previous €10 billion. Low income families and pensioners get a €200 cash payment to help with fuel bills. No mention of this having to be repaid like in the UK which is just a future tax rise on individuals.

Food prices and the Brexit penalty

Food costs are rising everywhere due to global supply trends. The UK left the EU and all the red tape and restrictions as a result have yet to come fully into force. With free movement the EU can share and buy across borders, Not so in the UK where delays in imports from the EU take longer and cost more. UK exports that moved freely once upon a time are now tied up in hundreds of pages of red tape causing delays and making many, especially smaller companies, simply ending trying export to the EU.

Japan has always been an outlier with persistently low inflation despite very high levels of borrowing. Japan is the most indebted country in the world at 266% of GDP. 45% of this debt is held by the Bank of Japan.

Unlike the UK Scotland is a net energy exporter. We need the powers of independence to fully manage our energy industries in the interests of climate change, phasing out of fossil fuels and cutting the high levels of pollution still being generated from continued gas flaring in the North Sea. Norway is doing so much better with the lowest level of flaring of all international oil and gas producers. Russia is the worst offender on gas flaring with the largest share of all oil producing countries.

Obtaining EU candidate status following a successful independence referendum will open the way to a return to EU markets. There is an openness to be positive about Scotland joining the EU that did not exist in 2014 which would have involved us leaving the EU. Due to regular contact with EU governments and the US there is an understanding of the political situation in Scotland that did not exist in 2014.

Anyone who has not yet watched the Brookings video should do so, this is an international statesperson on the world stage. The unionists are furious because they don’t have anyone in Nicola Sturgeon’s league. (Starts about 10 minutes in)

Labour MP criticised after failing to appear for own debate