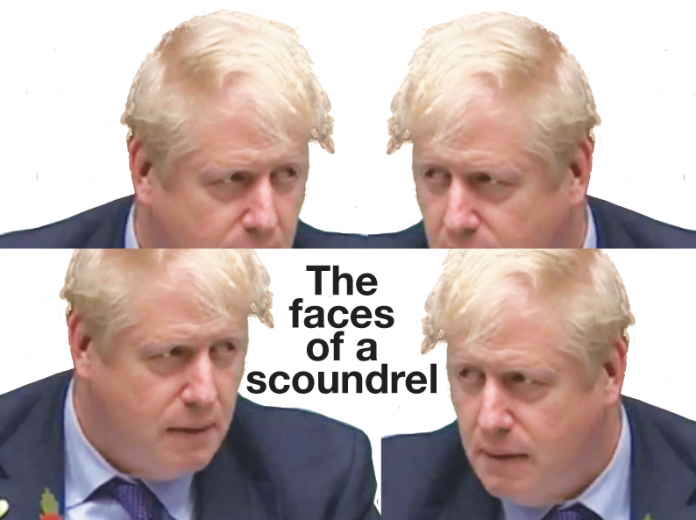 Boris Johnson has many faces and the problem for commentators is to find the most predicable ‘face’ in order to make a judgement on the most likely path, or face he will adopt, in any given set of circumstances as ‘Brexit Gets Done’ and Johnson charts a path for the UK in a world far removed from classical imperialism.

So what do we know about Johnson that will guide such assessments? As a journalist he was renowned for turning out rapid articles, the more outrageous the better which kept him one of the most highly paid in the business if not entirely highly thought of by his editors. Max Hastings of the Telegraph being a good example who held Johnson in low regard whilst aware he kept the pages turning and readership applauding no matter what Johnson would write next.

In an article for The Guardian Max Hastings wrote: “when I edited the Daily Telegraph … he was our flamboyant Brussels correspondent. I have argued for a decade that, while he is a brilliant entertainer who made a popular maître d’ for London as its mayor, he is unfit for national office, because it seems he cares for no interest save his own fame and gratification.”

“Boris is a gold medal egomaniac. I would not trust him with my wife nor – from painful experience – my wallet.”

Back in 2012 Hastings also said of Johnson “I am as susceptible as most of the British people to Johnson’s brilliant, warm, funny public persona.” This commentator wonders if this is a particularly English form of ‘fun appreciation’ as I find nothing that spills out from Johnson’s quill or his mouth in the least engaging. Hastings also warned, “Boris is a gold medal egomaniac. I would not trust him with my wife nor – from painful experience – my wallet.”

Johnson’s much lauded period, promoted heavily by Johnson himself, as London Mayor actually delivered its most notable outcomes on work begun during his predecessor’s period in office. From the London Olympics which Johnson’s entertainer profile was reasonably suited for, to the extension of the Oyster Card, initiated by Ken Livingston and the Bike scheme Livingston started and rapidly morphed into Boris’ Bikes by an enraptured media, there is not really much to show in the way of innovation from his over-hyped years as Mayor.

In all matters of personal and political relationships Johnson is totally ruthless.

Then there is the Garden Bridge much less mentioned. Boris is keen on the idea of building bridges but only as physical infrastructure. Building bridges to resolve political issues or problems in personal relationships is another matter beyond Johnson’s ken. In all matters of personal and political relationships Johnson is totally ruthless. While Mrs May doggedly tried to keep the non-compatible elements of her fractious party in an unsuccessful attempt at projecting a vague semblance of unity, Johnson was engaged in tearing her credibility into tiny shreds, one piece at a time. From the fractious far-right Boris had plenty eager helpers in the painfully slow dismantling of May’s premiership and authority.

May: forlorn figure of failure

Johnson’s period at the Foreign Office came to and end with his resignation, much to the relief of permanent civil servants with many diplomatic fences to mend as Johnson’s ability to generate chaos and damage to UK foreign policy was without historical precedent.

To listen to May from the back benches of this government, three things are immediately clear: her total loyalty to party outflanks the personal pain of her overdue end as PM: secondly May manages somehow to dredge up a half hearted impression ‘The Boris’ is her protégé; finally, her presence on the back benches signals her error in contesting her seat on 12th December. She will forever remain there as a forlorn figure of failure when she might well have found a new role outside parliament.

Theresa May is not at all amusing by any standard but she does share much with Johnson in what little there is to glean from where they both stand on political issues. Famous for her ‘Nasty Party’ and glib Brexit phrases that will haunt England for generations, she was the most draconian of Home Secretaries before the arrival of Priti Patel.

Where May trotted back and forth between her irreconcilables Johnson had no such intention. Ruthless expulsion and exclusion would create the unity demanded. Any still given to any kind of independent thinking or even dare action would be in no doubt of the consequences. Absolute obedience is demanded and the whips handed the power of Oliver Cromwell’s most ardent enforcers.

Margaret Thatcher’s end came quickly after Geoffrey Howe’s resignation speech on 13th November 1990. Suddenly the quiet spoken Howe became the wolf in sheep’s clothing to demolish Thatcher’s premiership. In Thatcher’s end there is a warning for the careless Boris Johnson, as in, “I don’t care a mouldy fig for what anybody thinks.”

For now Johnson might seem able to look forward to five years and the prospect of a second five. Nothing in politics, the performance of the UK economy in a mid-Atlantic no man’s-land or Johnsonian humour and guile will save him when middle and northern England suddenly awake from false dreaming to harsh nightmare reality.

I confidently predict Johnson’s premiership will end badly. The date is more difficult, two years? four? into a second term? Much more important is for Scotland not to be around for Johnsonian instability following the 2020 independence referendum.

May’s Remainer reputation is undeserved. In reality she was an arch-Eurosceptic keeping her head down in the Home Office, intent on making immigrants as unwelcome as she could. Dragged out by Cameron and Osborne she became the most reluctant of Remainers only when charged to support the Cameron party line. On Europe she is more comfortable following Johnson’s dictates.

Howe and Thatcher were on different pages. Howe was a firm supporter of EU membership whilst Thatcher was a natural Eurosceptic although persuaded by Howe to support the Single Market. To put Howe’s total contribution to the Thatcher years in context it is important to record that as Chancellor he presided over a period of vicious austerity that is a hallmark of all post 70’s Tory governments. Johnson promises to be different but his infrastructure spending for the Midlands and Northern England is only likely to partly replace lost manufacturing jobs.

Thatcher and Howe presided over the destruction, rather than the reform of manufacturing. Johnson’s political intentions will mark a further decline in production output. This is especially dangerous to Scotland as our exports are extremely vulnerable to the loss of EU markets, collaborative pan-European research to develop the industries of the mid and late 21st century and the necessity to have our own voice at the centre of European decision making and influence.

So what of the Johnson faces? He is amusing according to some. He is totally ruthless in political and personal relationships. There have been “Testimonials from ex-lovers who found him amusing in bed”

Others have found the manner of their discarding a testimonial to his ruthless uncaring. His sister Rachel “has also talked of her brother’s ‘very Sicilian’ attitude to anyone who crosses him.”

Amusing, ruthless, careless, vindictive, spoilt child, given to uncontrollable anger outbursts, untrustworthy – these are the characteristics of the UK’s Prime Minister which we would sum up as the face of a rather nasty scoundrel.
Or to paraphrase Burns, Sic a Parcel o’ a Rogue.