by a Newsnet.scot Reporter

The planned women’s “super-prison” at HMP Inverclyde has been scrapped following a policy review by Justice Secretary Michael Matheson.

The £80m prison, work on which was due to start later this year, was envisaged originally as a replacement for HMP Cornton Vale in Stirling, the main womens prison in Scotland.

The decision was welcomed by all parties, after concerns were raised about whether a single prison for women was in keeping with preferred general policy.

A review by former Lord Advocate, Eilish Angiolini in 2012, had recommended that female offending be tackled via small regional units. It is known that the imprisonment of women has a serious effect on family life and a disproportionately negative impact on prisoners.

The Inverclyde project, which would have seen the building of a new jail on the site of a former high school in Greenock, was originally approved by former Justice Secretary Kenny MacAskill, as a means of allowing Cornton Vale to close down by 2018.

Cornton Vale houses more than half of all women prisoners in Scotland, with others housed in Edinburgh, Greenock, Inverness and the new HMP Grampian at Peterhead.

But the original decision was criticised by many, including the opposition parties, and questioned by reform groups. Mr MacAskill himself recently indicated that a re-think was required. A campaign was also run by the lobby organisation Women for Independence.

The government now plans to enter a consultative period with a view to providing a regional and community based solution to female custody. 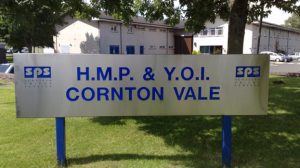 It is likely that the new solution will be to create community based services across Scotland, on similar lines to the 218 Centre in Glasgow, where Mr Matheson chose to make his announcement today.

The centre is a 12-bed residential unit with a day service including group work sessions and one to one support, designed as an alternative to court. The unit is run by the charity Turning Point Scotland.

The aim is to cut re-offending among female convicts, many of whom have distinct problems including drug misuse, poor mental and physical health and have suffered abuse in various forms.